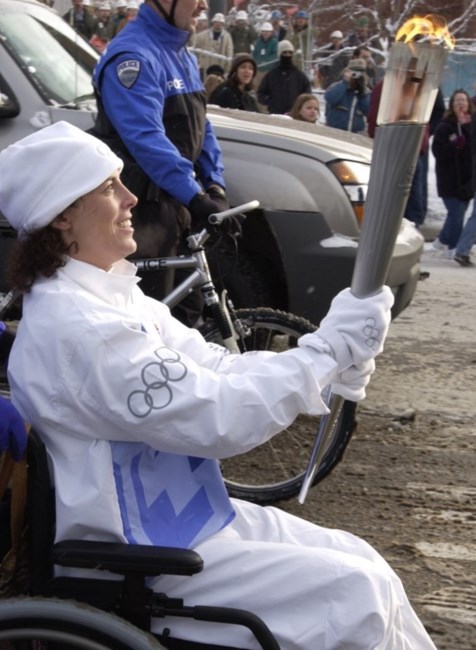 Kelly Ann Walker November 17, 1965 — May 3, 2022 Kelly Ann Walker passed away peacefully in her home, surrounded by her family and her dog Alice, on May 3, 2022 due to complications from her 33-year battle with Multiple Sclerosis. Kelly was born in Denver and raised in Lakewood, Colorado. She graduated from Alameda High School, where she set a new record for athletic letters earned by a woman, in 1984. She earned a bachelor’s degree in exercise and sport science from Colorado State University in December 1988; as she was completing her degree, she was diagnosed with MS. Never one to stand idly by, Kelly immediately became involved with the National MS Society, even as she worked on her master’s degree at CSU. Kelly went on to become a faculty member in CSU’s Department of Health and Exercise Science, where she worked until her retirement in 1998. (She earned another master’s degree in 2002 in Human Development and Family Studies, at which time the Kelly Walker Health Promotion Scholarship was established.) In 1993, Kelly’s family and friends formed Team Sugarbee, which has taken part in the National MS Society’s Bike MS ride every year since. Team Sugarbee was the first non-corporate team to raise $1 million, and has since surpassed the $2 million mark. Kelly will be remembered for her incredibly generous spirit, unwavering loyalty, and wickedly sharp sense of humor, all of which will remain with her loved ones forever. Now, unencumbered by the effects of MS, Kelly is soaring free—probably dancing to some of her favorite 80s music or on a long run with one of her beloved German shepherds. Kelly is survived by her parents, Tim and Betty Walker; her brothers, Timothy Jr. (Heidi) and Eric Jay, her niece Emma (Bix), nephew Cameron (Natalie), niece Anna, and her former partner and love of her life, Jack Haley. In addition to her immediate family, Kelly is survived by numerous aunts, uncles, and cousins, hundreds of friends, neighbors, and colleagues—it was impossible not to be touched by an interaction with Kelly. A memorial service is planned for July 23, 2022 at 2:00 pm, at the Lory Student Center, Ballrooms B, C and D on the CSU campus. The service will be live-streamed: https://www.youtube.com/watch?v=Cut2mWgrtyM In lieu of flowers, the Walker family requests that those wishing to honor Kelly make a contribution to: Kelly Walker Health Promotion Scholarship Endowment Allocation #49275 CSU Foundation, 300 University Services Center, Fort Collins, CO 80523 (Or online at https://advancing.colostate.edu/KELLYWALKER) or in honor of Kelly Walker or Team Sugarbee to the National MS Society 900 S. Broadway, 2nd Floor Denver, CO 80209 (Or online at https://mssociety.donordrive.com/index.cfm?fuseaction=donorDrive.team&teamID=15352) Or to Animal House, or the charity of your choice. “I have fought the good fight. I have finished the race. I have kept the faith.” —2 Timothy 4:7
See more See Less

In Memory of Kelly Ann Walker