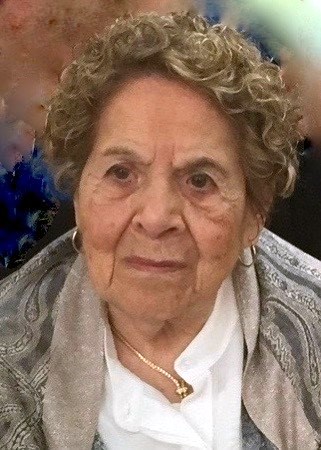 West Yarmouth, Mass. – Elizabeth (Pieples) Flaminio formerly of Vandergrift and Apollo, Pa., and now of West Yarmouth, Mass., on Cape Cod, died on September 22, 2022. She was born on August 18, 1924, daughter of Giuseppe and Antoinette (Notarnicola) Piepoli (Pieples). She graduated from Vandergrift High School in 1942. Liz worked at Schenley Distillery during the war years, and later at Sweetlane Chocolate Shop and Diner, where she met her husband, Rocco (“Rocky”) Lee Flaminio of Saltsburg, Pa. Liz and Rocky were married on September 1, 1947, and lived in Washington Township for more than 50 years. Liz was a devoted wife, mother, and grandmother. When her daughters Christina and Nancy were growing up, she led Brownie and Girl Scout troops, coached her daughters in a softball league, and was involved in their school PTA. She spent long periods of time on her own with her daughters while her husband served in the U.S. Marine Corps and was stationed in Alaska to set up the DEW (Distant Early Warning Line) and California during the Korean War. She was President of the Vandergrift Women’s Club for several years and served as Chairperson of their Annual Ball, which raised money for local charities. Liz had a wonderful sense of humor and loved her music. She sang in a choir for many years. You could usually hear the big band sounds of Benny Goodman, Tommy Dorsey, or Glenn Miller, and the crooning of Frank Sinatra, Nat King Cole, Dean Martin, or Tony Bennett, playing on their stereo. When a particularly dance-worthy tune rendered, Rocky would take Liz’s hand and twirl her around the living room. A family gathering always included a sing along with their daughter Christina playing the organ. Liz and Rocky were Country Western fans and made numerous trips to Nashville, Tenn., and the Grand Ole Opry. They also were world travelers, visiting Paris, France and Rome, Venice, and Florence, Italy, together, as well as Hawaii, the Florida Keys, Orlando, Fla., Reno and Las Vegas, Nev., and the locations of their children and grandchildren in Washington, D.C., Ocean Pines, Md., Philadelphia, Pa., Newark, Del., Columbia, S.C., and Cape Cod, Mass. Back in Apollo, Pa., they were members of St. Gertrude Catholic Church where they, and both of their daughters, were married. When her daughters were grown and had children of their own, Liz was a loving grandmother who especially enjoyed cooking with and for her grandchildren and extended family. She loved to entertain—both with her food and her humor—and loved to spend time with family. Liz was predeceased by her beloved husband Rocky (dec. 2005), her sister Lena, her brothers Alfred, Joseph, and Andrew Pieples, her brother-in-law Thomas Flaminio and his wife Marvyl. She is survived by her daughter Christina Canton of Chevy Chase, Md. (and husband Charles); her daughter Nancy Meagher of Cape Cod, Mass. (and husband Billy); her grandchildren and great grandchildren: Shannon Canton German (and husband Ryan) and great grandchildren Skye, Dylan, and Braden of Wilmington, Del.; Beth Meagher Friel (and husband JJ) and JJ’s son Jackson of Cape Cod, Mass.; Meaghan Canton Feder (and husband Kevin) and great grandchildren Gavin, Ella, and Hunter of Chevy Chase, Md.; Lauren Canton Winne (and husband Llosh) of Kapaau, Hawaii; Mark Meagher of Boston, Mass.; and Charles Rocco Canton (and wife Annie) and great grandchildren Nora, Rocky, and June of Rye, N.Y. Liz is also survived by her sister Bernice McCutcheon Cornelia (and husband Charles) of Apollo, Pa.; her brother Thomas Pieples (and wife Charlotte) of Cincinnati, Ohio; her sisters-in-law Jenny and Gloria Pieples of Irwin and Arnold, Pa., her brother-in-law Herman Flaminio (and wife Frieda) of Wexford, Pa., and twenty nieces and nephews. Liz’s family would like to thank her wonderful caregivers at Mill Hill Residence in West Yarmouth, Mass., as well as at Broad Reach Hospice. There will be a gathering and a Mass at St. Gertrude’s Church in Vandergrift, Pa., on Saturday, November 19, 2022.
See more See Less

In Memory of Elizabeth Flaminio