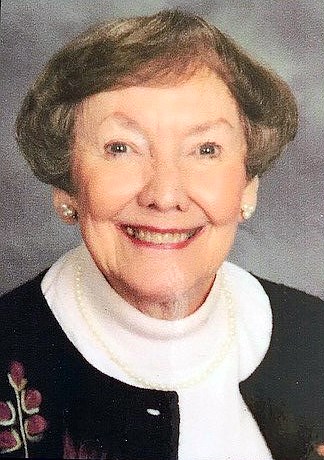 MARJORIE HARTLEY O’LAUGHLIN Former Treasurer of the State of Indiana and renowned public servant to the people of Indiana. 93, of Indianapolis, departed this life Friday, September 30, 2022, surrounded by her grateful family. Marge O’ was born September 11, 1929, in Indianapolis to the late Joseph W. and Dorothy V. (nee Drew) Hartley. She was a proud graduate of Shortridge High School and attended Indiana University. Loving matriarch and devoted Hoosier, Marge was a kind and gentle soul who always put the needs of others before her own. Countless times during her career, Marge has been recognized for her groundbreaking political and public service. Always delivering on her undertakings, she was a shining example of principled civic leadership and a trailblazing beacon of light for all women in politics. Marge’s political activism started in the 1960’s as she was alarmed by the extreme right John Birch Society members running for office. After proving to be a stellar volunteer, she was asked to run for City Clerk along with Mayoral candidate, Richard Lugar, her former cello buddy in the Shortridge HS orchestra. They were the young upstarts bucking the status quo. During that campaign, she discovered she was pregnant. They won that historic election and were sworn into office in January 1968. Six weeks later, Marge was in the labor room with child #7 and was handed bond documents that required her signature in order to continue Market Square Arena planning. Marge was then twice elected as Indiana Clerk of the Supreme Court and the Court of Appeals, serving from 1978 to 1985. Her favorite statutory duty was administering oaths to all the newly admitted Indiana attorneys. Marge continued her career of public service by running for Treasurer of State. In 1987 she became the State Treasurer of Indiana and served two terms, becoming the second female state treasurer in the State’s history. After serving as Treasurer of State, Marge became the treasurer for the Marion County Health and Hospital Corporation until retirement. Following “retirement”, she served as a member of the Health and Hospital Board, the Indiana Bond Bank Board and frequently attended weekly Kiwanis Club meetings. During her illustrious career, she was also earning a livelihood to raise her seven children on her own. To summarize Marge O’s long career and to quote Ginger Rogers, “I did everything Fred did, only backwards and in high heels.” Outside of her civic and motherly duties, Marge was a passionate sports fan – IU and Pacers basketball, Colts football and the Indy 500. She attended the 1st 500 mile race after Tony Hulman purchased IMS. Left to enjoy their memories and to share her legacy are her devoted children: Kate (Seattle, WA), Beth, Bill, Patty (Buzz) Turner, Brian (SF, CA), Kevin (Sheila), Andrew (Heather Mahon); grandson Cory (Kayla) White; granddaughter Katie O’Laughlin (fiancé Alec Da Silveira), step-grandson J.T. Turner (Meagan Froman); brother Joseph W. Hartley, Jr. (Savannah, GA); dearest friends William Miller and Carole Johnston, and many loving nieces, nephews, along with a host of dear friends and grateful Hoosiers. She was predeceased by her parents, Joseph W. and Dorothy Drew Hartley; dearest sister, Patty Jones; daughter, Linda O’Laughlin; beloved grandsons, Patrick O’Laughlin and Jett Simpson. In lieu of flowers, memorial contributions in Marge’s name are suggested to: Indiana AIDS Fund, Inc., Gleaners Food Bank of Indiana, Kiwanis Club of Indianapolis, 320 N. Meridian St. 46204. A memorial visitation for Marge will begin at 1:00 pm and conclude at 5:00 pm on Monday, October 10th at Leppert Mortuary – Nora Chapel. Fond memories and expressions of sympathy may be shared at www.leppertmortuary.com for the O'Laughlin family.
See more See Less

In Memory of Marjorie H. O'Laughlin