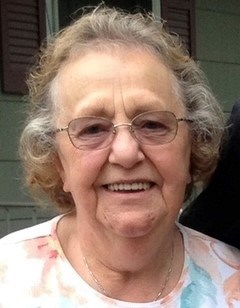 Barbara Ann Miskiewicz (nee Danielczyk), 81, of Beachwood, NJ, passed away peacefully on Wednesday, September 21st, 2022 in Toms River, NJ. Barbara was born on May 14th, 1941 in Larksville, PA. It is here that she grew up, attended school and met the love of her life, Anthony Miskiewicz. They married in 1960 and moved to Plainfield, NJ. A year later they moved to North Plainfield and remained there until 1985 at such time they relocated to Beachwood. In her earlier years, Barbara worked at Knickerbocker Toys in Middlesex, NJ as a supervisor then as a liaison for Applause Toy company in NYC. Upon moving to Beachwood, Barbara worked as a title clerk for then Bob Ciasulli, Honda and Lester Glenn Buick both in Toms River. Barbara's favorite hobbies were bingo, crafting and spending time with her family. She is predeceased by her parents, William and Frances (nee Rychlewski) Danielczyk, her step-mother, Stella Danielczyk, her husband of 60 years, Anthony Miskiewicz, her brothers, William and Robert Danielczyk and her sister, Frances Fronzoni. Barbara is survived by her four children: Tony Miskiewicz and his wife, Sally, Eagle River, WI., Robin Gavin and her husband, Kevin, Bayville, NJ., Sandy Gartner and her husband, George, Forked River, NJ., Donna Laytona and her husband, Steve, Grant, Fla., eight grandchildren, AJ, Abbey, Nicholas, George, Samantha, Sarah, Katelyn and Autumn and her beloved furry friend, KC. Services for Barbara were held privately. The family would like a donation to be made in memory of Barbara to aspca.org. Fond memories and expressions of sympathy may be shared at www.andersoncampbellmanchester.com for the Miskiewicz family. Arrangements were made by Anderson and Campbell Funeral Home, Manchester, NJ
See more See Less

In Memory of Barbara Ann Miskiewicz