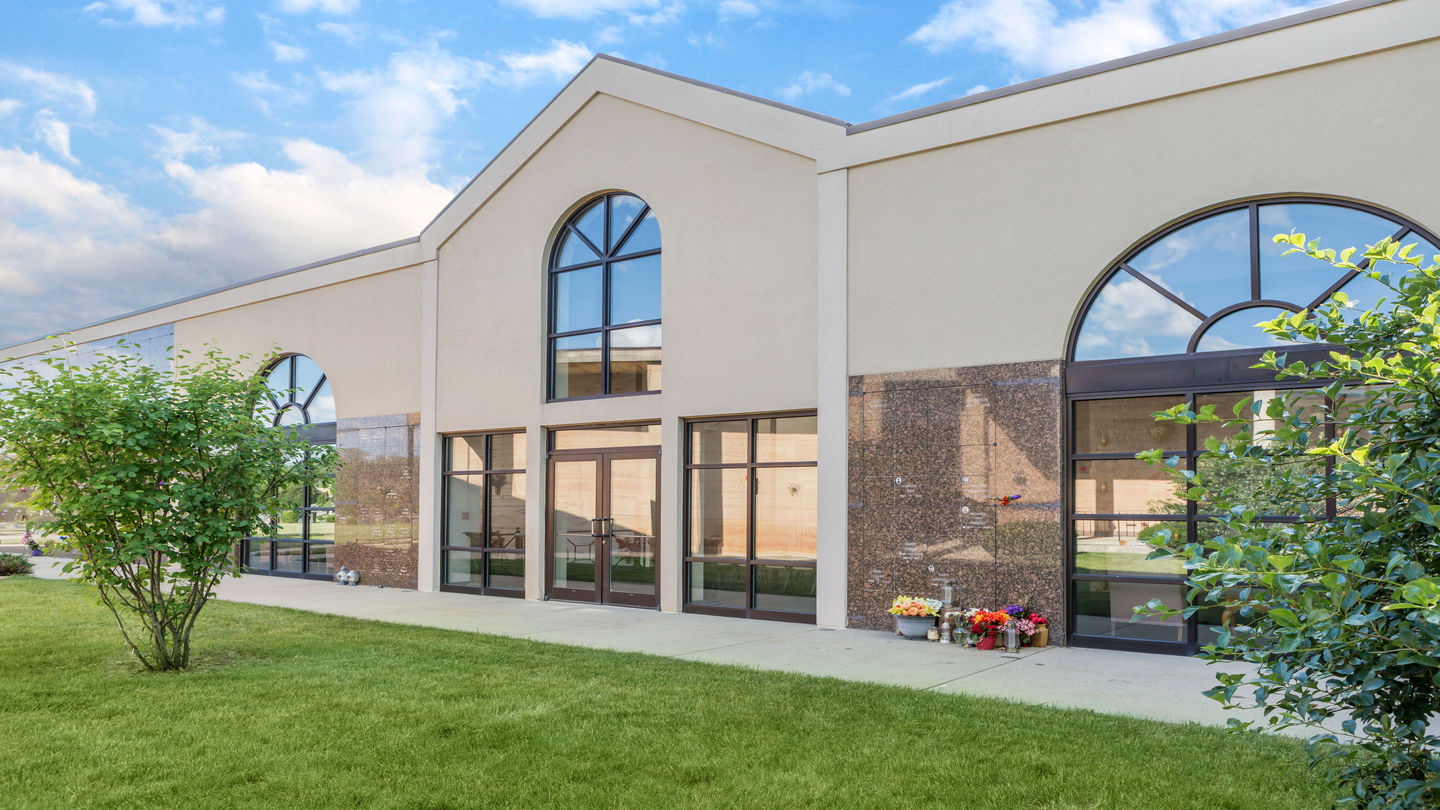 At Elmwood Cemetery and Mausoleum in River Grove, Illinois, we provide distinctive burial options that preserve memories and history for generations to come.

Inside Elmwood’s well-manicured gardens lie traditional in-ground burial spaces, as well as above-ground entombment. Our mausoleum serves as a stately centerpiece for our grounds, finished in stunning stone that captures both the eye and heart.

Family estates offer an opportunity to give future generations a central gathering place to reflect on their heritage. We also offer burial of cremated remains, as well as scattering ceremonies after cremation.

Discover our Hellenic American Veterans Memorial, erected by the Hellenic Post No. 343 of the American Legion. Antique trees with seasonal foliage serve as a backdrop behind trimmed hedges, leading to a reflecting pond.

We warmly welcome celebrants of all faith traditions to our on-site chapel. If you would like to arrange a tour of our grounds, or require immediate assistance with burial in River Grove, please contact Elmwood Cemetery and Mausoleum. It is our honor to serve you day or night.

The land that Elmwood Cemetery sits on was originally a Union Army Post which housed barracks for soldiers during the United States Civil War. Our Civil War Memorials, in sections 4 and 41, pay tribute to the sacrifice Chicago-area men made from 1861 to 1865. Erected in 1903 by the U.S. Grant Post 28 of the Grand Army of the Republic, the memorial is inscribed with the names of the 48 Civil War battles in which post members fought. A statue of a Union Army flag bearer stands atop the memorial. It is flanked on each side by a figure of a representative of the Union Forces: Calvary, Infantry, Artillery and Navy. A total of over 200 Civil War veterans are buried near the monument. The Washington Post monument sits across the street in section 41 honoring soldiers who fought for our country.

The River Grove train depot was constructed in 1887, making it possible for those in the city to visit what was then farm land and country. Nine years later in 1896, the land was made into a cemetery, then called Elmwood Cemetery after the 5 Elm Groves in the area. Elmwood Cemetery has served family of all faiths and nationalities with dignity and honor for over 121 years. We have families of German, Norwegian, Irish, English, Chinese, Korean, Slovakian and Bohemian decent, and Elmwood Cemetery has been the preferred cemetery for many generations of Eastern Orthodox families for over 90 years. We also serve the Greek, Assyrian, Armenian, Russian, Ukrainian and Serbian communities. In fact, many families have chosen our compassionate care and beautiful park for their loved ones for as many as 4 generations.

"The burial was perfect. We were met at the gate and guided to the plot. A tent was set up and everything went perfectly. From initial contact to conclusion Sabrina & Acadeli were fantastic. Thank you so much"

"Once we left the cemetery, we were saddened to leave our loved one in the dark. We had to fly back to NY and it weighed heavy on our minds.Our contact at Elmwood, Maribel Enriquez said she would be happy to put a lighted cross for us if we so chose to. As of the writing of this comment, she was preparing to place what we sent. This has meant the wo

rld to us because we feel like our Aunt Anna is not alone."
Vea másVea menos

"From start to finish Hanne and your team were exceptionally compassionate and helpful. Hanne's thoughtful communication and attentive listening provided great peace of mind. Her recommendations and guidance made the entire experience calm and soothing. It was a true blessing to work with her. The service was exceptionally well coordinated. The grou

nds men were also very respectful and compassionate. Their thoughtfulness in leaving the picture we had during the service on the grave one week later was extremely touching. Truly shows that your entire team understands how to provide care and concern to families during a difficult time. Thank you and God Bless you."
Vea másVea menos

"Maribel was very kind and comforting in our time of sorrow. She represented your cemetery very well. She even recommended a restaurant for the luncheon after the funeral and it was a very good choice."