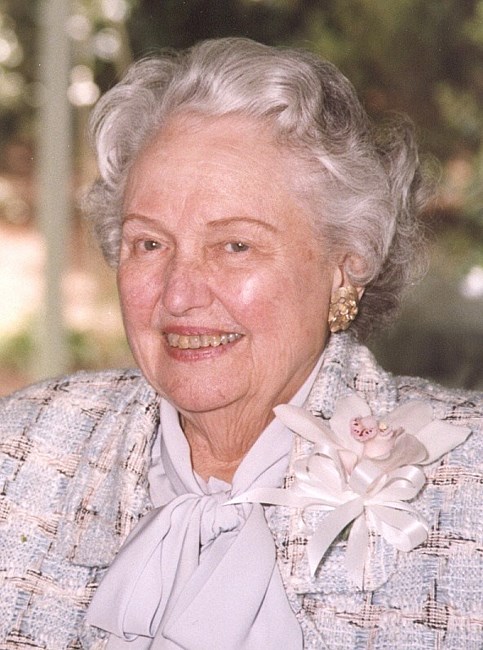 Sarah Walkup Belk Gambrell, of Charlotte, N.C., beloved daughter, sister, mother, grandmother, and aunt, died at the age of 102 on Thursday, July 30, 2020. “Mrs. G.” was born in Charlotte on April 12, 1918, the second of six children and only daughter of the late Mary Irwin Belk, an educator and homemaker, and William Henry Belk, Sr., founder of the Belk department store organization based in Charlotte. Sarah grew up, quiet and shy in a household of boisterous brothers, preferring to retire to a window to read instead of engaging in their competitions. Their home on Hawthorne Road was a constant gathering place for their enormous and close extended family of great uncles, aunts, and many many cousins. Her love of and devotion to family, and the inclusion and remembrance of each and every one, was a lifelong priority. Sarah attended Charlotte public schools before spending a year alone, at about the age of 14, at a Boston, MA hospital to treat scoliosis. It led her to become independent and self-reliant. In one of her first acts of defiance, she refused spinal surgery against the wishes of her doctors and family. And despite its lifelong crippling effects, Mrs. G. took scoliosis in stride as she did any obstacle. Sarah graduated in 1939 from Sweet Briar College, Sweet Briar, VA. Against the wishes of her family, she followed in her father’s footsteps to become a merchant. Born 2 years before women won the right to vote, Sarah entered the workforce at a time when women were expected to marry and have families, or become teachers, nurses or maids. She had other ideas and began her career in retailing in 1947 at Belk. She loved business and was an avid advocate of the business principles she learned from her father. Shortly thereafter, Sarah moved to New York City to create a place for herself within the family and the Belk business at the New York Belk buying office, the epicenter of the company’s merchandising. When she was not given an office or desk, she quietly set up work in the lobby. After a considerable period of time, realizing she was not leaving, she got her office. She went on to coordinate the company’s women’s wear and cosmetics businesses for Belk store buyers at hundreds of stores across the South until her health prevented her attendance. Mrs. Gambrell developed and maintained long-standing relationships with Belk employees and retirees both during and after her career. She was a tireless advocate for women and the important role they played in the growth and success of the Belk organization and the community. In 1952, Sarah married investment banker Charles Glenn Gambrell, another southerner, from Belton, SC. Their two-career, 30-year marriage in New York was ahead of its time. They inspired and were inspired by each other and loved each other devotedly. In 1960, Sarah and Charlie, aged 42 and 58 respectively, became first time parents. Charlie was always proud to be the oldest father at his college and business school reunions. They were active parents, including their daughter, Sally, in all aspects of their life, at a time when children were to be “seen but not heard.” At the age of 80 Sarah became a grandmother. She died the devoted and beloved grandmother of her own 4 boisterous grandsons, not unlike her own brothers. When asked for advice by her daughter on how to handle the activity and energy, she’d smile, and reply “I have no idea” and quietly enjoy their exuberance. In 2015, after the sale of her beloved family business, Sarah focused her efforts on the modernization of the Gambrell Foundation. This meant transitioning from the two-woman team of Sarah and 89 year old secretary, Polly Davis, and their legal pad system to her current staff of 6. Much has been written about her extensive business, community and philanthropic accomplishments: she was a shrewd and highly respected businesswoman, and a tireless community leader who could drive a hard bargain to support the causes she believed in. But it all stemmed from her deep faith in God, her belief in the goodness of people, and a lifelong commitment to supporting and creating change in her community and the world. She knew firsthand the frustrations that came from limited thinking, prejudice and fear. She believed in bringing people together, connecting people to ideas, and creating broad shared support to address problems in the community and in the world. Until the end, Sarah was a passionate lifelong learner. As a child she would sneak out the window to keep reading on the rooftop by moonlight. At age 100 she started following the NBA. For some reason known only to her she cheered for the San Antonio Spurs. When asked why this sudden and late-life interest in men’s basketball she remarked, that maybe it was about time. And about the Spurs? Why not? At past family dinners and celebrations, Sarah took to reminding her family, and grandsons in particular, that she was a rebel. She hated labels: she was not elderly, she was NOT retired, and she did not think she was at the end of life. She was “a person of independent thoughts.” And she chose to define for herself her reality and her beliefs. Mrs. G. is survived by her daughter Sally and son-in-law, Brian Bridgford; grandsons Charlie, Cooper, Christopher and Caleb Knight; sister-in-law Kat Belk-Cook; nieces and nephews: MC Pilon; Bill Belk, Irene Belk Miltimore, Marilyn Belk Wallis, Carl Belk, Tommy Belk, Paul Belk, Connie Belk, Jay Belk, Mary Belk Melton, Margaret Belk, Tierney, Katie Belk, Tim Belk, McKay Belk Sr., Johnny Belk; many many cousins, and the many people who felt she was their family too. Due to the Covid Pandemic, her funeral service will not be open to the public. It will be live-streamed Wednesday, August 5th at 10:00 AM EDT. http://www.myersparkpres.org/funeral In lieu of flowers, donations to The YWCA affordable housing initiative.
VER MÁS VER MENOS