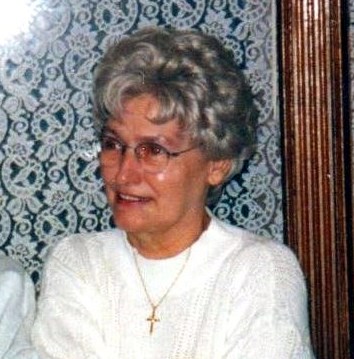 Born; June Arlene Smith to Lee Jesse and Grace Bernice (Farnsworth) Smith on June 19, 1927. June had three sisters; Shirley, Grace Lou and Edna Mae. The family resided at 801 South Washington Avenue in Spring Valley, Minnesota. June attended Spring Valley Elementary and High School which was all one school. She then went on to Minneapolis, Minnesota to attend Bible College and work at a photo developing lab while living with her older sister Grace Lou. Later, June worked as a candy striper caring for newborns. She met a man named Richard (Dick) Krahn through her sister Edna Mae who happened to be dating Dick’s good friend Jerry Kunz. Once June laid eyes on him, she knew he was the man for her. They ran off and got married by the Justice of the Peace on August 5, 1950. Soon after, they married in the Catholic Church. They decided to move to Portland Oregon so that Richard could attain work in the ship yards with his father Fred who had ventured out to Portland during WWII. They started out living in NW Portland then to SW Portland. They ended up buying a home in North Portland, where she lived for over sixty years. June and Dick had four children. While raising her children June enjoyed playing the violin as well as the piano. She also enjoyed canvas oil painting; her artistic moniker was Ju Nae. Once the children left the roost, June and Dick traveled more often to their respective home towns of Rochester and Spring Valley Minnesota. Both still have family living there. In their retired years they enjoyed going to the beach once in a while. For the most part they really enjoyed dining out on a daily basis and dropping by their children’s homes to visit. During the final years of her life June was under the care of her daughter Theresa. June passed away ever so peacefully July 29, 2022 at 5:20pm under the care of Community Home Health and Hospice in Vancouver, Washington (just across the river from Portland). Survived by her children; Richard of Portland, Stephen (Gloria) of Warren, Mark (Denise) of Portland, Theresa (Harley) of Portland. Grandchildren: Michelle, Tabatha, Teona, Twila, Katherine, George, Marcus, Stephen, Jessica, Sadie. Eighteen Great Grandchildren. Three Great Great Grandchildren. Preceded in death by her husband Richard (Dick), Granddaughter Tina, Great Grandson Keith. Services will be held starting at 11am on Wednesday, August 10th 2022. There will be a visitation, funeral service, and a graveside service followed by a reception at Skyline Memorial Gardens Funeral Home: 4101 NW Skyline Blvd Portland, Oregon 97229 503-292-6611 The Krahn family asks to send flowers to Skyline Memorial Gardens for the service or in lieu of flowers, please donate money to Community Home Health and Hospice. 3102 NE 134th St. Vancouver, WA. 98686
VER MÁS VER MENOS