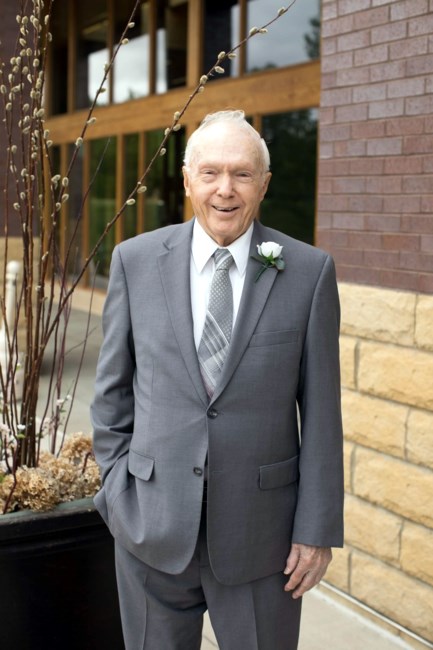 Bob served in the Korean War and was awarded the Purple Heart. He was always grateful for the prayer book he carried in his shirt pocket that saved his life in the war. Bob and Betty's relationship began with a two cent stamp when Betty wrote to him while he was in the service. They were united in marriage at St. Stanislaus Catholic Church on Oct. 9, 1954 and have been by each other's side for 67 years. Together they raised ten children.

Bob played accordian and taught at Traficante and Nicosia music schools. He earned an accounting degree from Rasmussen College and spent his career at Great Northern/Burlington Northern Railroad where he was employed in the Freight Claims Office for over 30 years, retiring in 1985. He was a long standing member of St. Casimir's Catholic Church where he served as a trustee for a number of years.

Bob's hobbies were his children. He had a sense and memory for numbers and spent countless hours making sure his family had all they needed plus some. From coaching baseball, riding the bus to work so the older children had a car to use, vacations in northern MN and providing educational support; he worked hard and was proud of his family.

He was preceded in death by his parents; brother, Richard (Audrey); mother and father-in-law; 2 brothers and 2 sisters-in-law.

Memorials preferred to Our Lady of Peace Home and St. Casimir's Church.