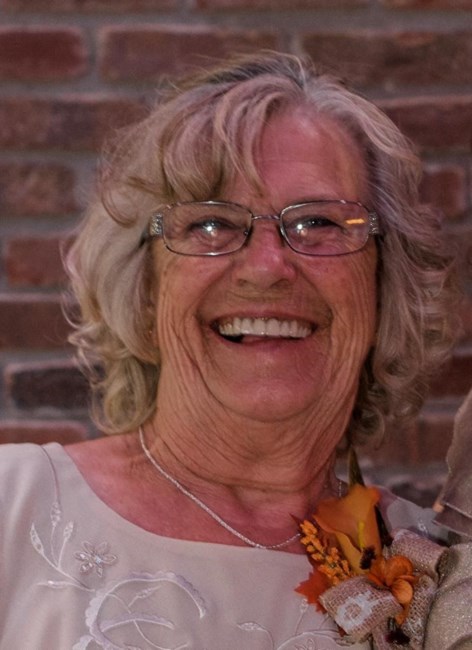 Janice Fay Kienzle went to be with the Lord on January 8th, 2021. Janice was born September 17, 1943, in Mobridge, South Dakota to Edwin (Bill) Badure and Hulda (Herman) Badure. She grew up in Mobridge, South Dakota and attended Zion Lutheran School where she was baptized and confirmed. She married Vern Kienzle on April 5, 1959. To this union, 10 children were born. The couple raised their family in Black Hawk, South Dakota. Janice felt blessed that she was able to stay home and raise their children until they were all in school. She was often known as Ma Kettle and the Kienzle house was the neighborhood hangout. Janice worked various jobs in Rapid City including Alaska North Rapid Trailer Sales and managing Prairie Acres Estates. In 2004 she moved to Bayard, Nebraska where she worked at Chimney Rock Villa and Bayard Grocery. She purchased her forever home in 2011. Her passion was decorating her house and yard for the holidays. Janice was a very creative person and her hands were rarely still as she loved to do crafts and make gifts for her children and grandchildren. Another passion of hers was her yard. She created the Kienzle Village where she had a water fountain and a figurine representing each of her ten children. Which she was proud to have displayed in the Bayard Transcript. After retirement, she enjoyed helping her granddaughter with her daycare. Volunteering at the Senior Center and the Bayard Depot Museum. She was quite a social butterfly and never met a stranger. Janice had a vivacious personality and always made people around her feel welcome and loved. She had a spice for life and an eye for fashion. Her greatest love was her family. She will be missed by all. Loved ones to carry on her memory include her children June (Larry) Neiger of Bayard, NE; Vernon Kienzle, Brenda (Tim) Hutchinson, Wanda Pulfrey all of Rapid City, SD; Rocky ( Roxann) Kienzle, Debbie Embree of Black Hawk, William (Val) Kienzle of Greenville, SC; Janet (Randy) Sheffer of Rapid City, SD; Dallas (Sunshine) Stensaas of Green Valley, AZ; and Darla (Andy) Coffey of Madison, SD. Her Siblings Darreld (Carol) Badure of Mobridge, SD; Julie (Jim) Naasz of Bemidji, MN; Jackie (Brian) Carpenter of Aberdeen, SD; and Jamie Lynd Badure of Orlando, FL. Also, 31 grandkids, 35 great-grandkids and a great great grandchild due in April. She was preceded in death by her parents Edwin and Hulda Budure, her siblings Joan Stensaas, Jannelle Ochsner, Donald Badure, 3 great grandsons and compainions Leon Gayton (2003) and Richard Dick Eckman (2015). Funeral services will be held on Tuesday, January 12, 2021 at 10:00 am at Church of Christ in Bayard with Pastor Bill Ferrero officiating. Visitation will be an hour prior the service. Memorials may be given to the Bayard American Legion or Bayard Volunteer Fire & Rescue Unit. Online condolences may be left at www.dugankramer.com. Additional services will be held at Osheim Schmidt Funeral Home on Wednesday, January 13 at 10:00 am with burial following at Black Hawk Cemetery.
VOIR PLUS VOIR MOINS