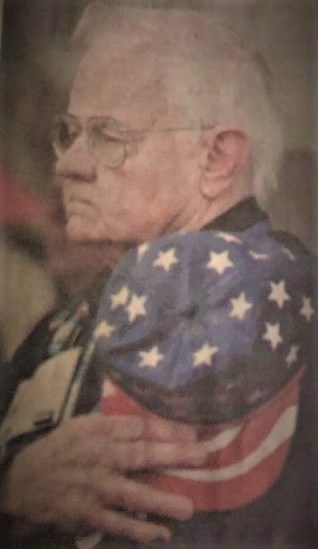 David Alan Deatherage, 88, of Independence, MO passed on July 22, 2020. He was born on March 5 th , 1932 to Roy and Susan (Miller) Deatherage in Higginsville, MO. David was a proud American, who served in the United States Army. He joined the Army on April 25, 1950 and served in “A” Company of the 187 th Airborne Regimental Combat Team, also known as the Rakkasans in Korea. While there, he made one jump into Kojedo prison camp. There they battled to regain control of the prisoners. After finishing his rotation he was honorably discharged on April 25, 1953. Dave retired in September of 1997 from the KCATA where he was a bus driver. After retirement he helped start the 187 th Rakkasans Ripcord Chapter and served on the Korean War Memorial committee. He is preceded in death by his beloved wife, Linda, father, Roy Deatherage, mother, Susan Hilliard, siblings, Clyde Deatherage and Jennie Heafley, and grandson, Cody Beeler. He is survived by his daughter, Tracy Beeler (Brad), granddaughters, Maddison Heilig (Chris), Shelby Beeler, and Kenzie Beeler, great grandchildren, Averie Heilig, Raelynn Heilig, and Logan Heilig, along with step-family, Virginia Hatt (Leon), Paula Woods, Doug Mckenna (Teresa), Cheryl Nichols (Kenny), an Don McKenna. Dave loved his family, his country and drinking beer with his buddies. You are invited to come and have one last drink on Dave, August 8, 2020 from 2pm-4pm at the VFW Post 1829, 5904 Crystal Ave, Kansas City, MO 64129.
VOIR PLUS VOIR MOINS