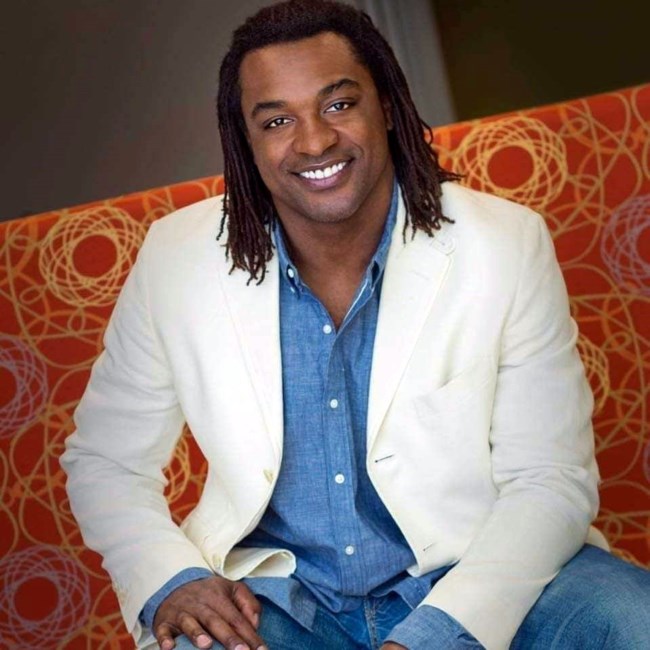 Cedric Myron Benson, 36, passed away Saturday, August 17, 2019. Cedric was born in Midland, Texas to late Cedric Turnipseed and Jackqueline Benson on December 28, 1982. Cedric attended Midland ISD up to graduating from Midland Lee High school. He moved to Austin in the fall of 2001 and played with the Longhorns until 2004. Cedric was a key player in the Longhorns’ resurgence under coach Mack Brown. “He was as good as you’ll ever see as a football player and as tough as they come,” said Brown. Benson was one of the top high school recruits out of the West Texas town of Midland. According to Texas Football magazine, he is eighth on the career rushing list for Texas high schools. He led Midland Lee to three straight state championships, the only three in school history, from 1998-2000. Benson played at Texas from 2001-2004 and his 5,540 yards ranks second at the university and 10th in NCAA history. He scored 64 career touchdowns (No. 9 on the NCAA all-time career list) with the Longhorns and won the Doak Walker award, given to the nation’s top running back, in 2004. He was the only player in school history to rush for at least 1,000 yards in four seasons and was inducted into the university’s Hall of Honor in 2014. Only nine players in NCAA history have rushed for 1,000 yards in four straight seasons and he helped the Longhorns post a 43-8 record, including a 3-1 mark in bowl games and three 11-win campaigns, in his four seasons on the Forty Acres. Texas finished the year ranked in the top six three times, twice-finishing fifth in the final AP Poll in 2001 and 2004. Benson was drafted No. 4 overall by the Bears in 2005 and helped Chicago reach the playoffs the following season. He had his finest years with Cincinnati from 2008-11, taking over as the featured back on a team that made the playoffs twice but lost in the first round each time. Benson ran for a career-high 1,251 yards while leading a playoff push in 2009, the first of three straight 1,000-yard seasons. He also led the Bengals to the playoffs in 2011, when Andy Dalton and A.J. Green arrived as rookies. Benson played one season with Green Bay, where he started the first five games in 2012 before suffering a season-ending Lisfranc fracture in Indianapolis on Oct. 17. He rushed for 248 yards and a touchdown on 71 carries and caught 14 passes for 97 yards in five games with the Packers before the foot injury. Benson finished his NFL career with 6,017 yards rushing and 33 total touchdowns. Benson loved football; however, it was his love of people that defined him. Everyone in his presence felt that they were his most loved person as they held his full attention in every conversation. Benson returned to Austin after his playing career and set up a foundation, NUFCED, to aid underprivileged children and families. Those efforts included helping repair damage at the home of the first victim killed in a series of bombings in Austin early 2018, providing scholarships for education and mentoring through football and community efforts. Cedric is survived by his mother Jackqueline Benson and two brothers, Dominic Benson and Deondric Long. He leaves behind his daughter, Nadine Benson, who was the love of his life, as well as, his grandfather, Homer Benson; five aunts, Sharon Wilkerson, Sharon Simmons, Tracy Benson-Daniel, H-mieri-ye Benson and Rhonda Jeffrie; two uncles, Ellison Portis and Charles Portis along with many more uncles, nieces, nephews, friends, loved ones and caring individuals. The family is grateful for the outpouring of love and attention from around the world. “We are forever blessed by the kindness of everyone". Ecclesiastes 3:1-4. Visitation will be held from ten o’clock in the morning to eight o’clock in the evening, Friday, the 23rd of August at Cook-Walden Funeral Home, 6100 N Lamar Blvd. Austin, TX. The family will be available to greet friends and family from six to eight o’clock in the evening, Friday, the 23rd of August at Cook-Walden Funeral Home. Funeral Services will be conducted at eleven o’clock in the morning, Saturday, the 24th of August at St. James Missionary Baptist Church, 3417 East Martin Luther King Jr. Blvd. Austin TX 78721. A private interment will be held at Texas State Cemetery.
See more See Less

In Memory Of Cedric Myron Benson