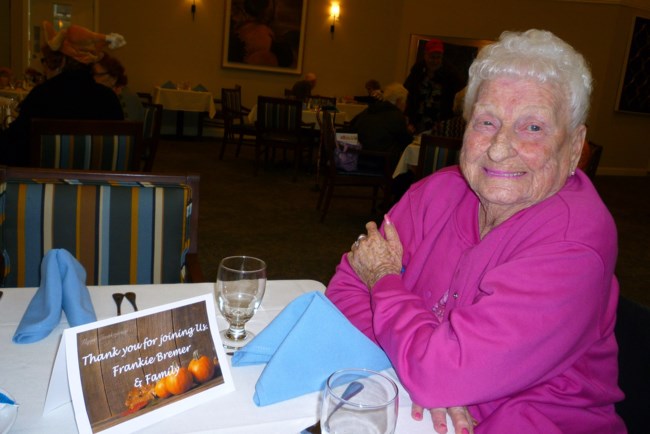 Frankie Greenway entered this life on September 15,1930 in Jonesboro, Arkansas. She entered into Eternal Life July 29, 2022. She is a beloved wife, mother, grandmother, great grandmother, sister, aunt and friend. Frankie was born to Thomas A. Greenway and Clara May Adams - one of nine children. It was a simple farm life for the family. Not much money but an abundance of love. Frankie enjoyed school and always regretted having to leave at 8th grade to help with the family. In her early twenties she met the first love of her life at her aunt's house for a gathering. Charles Vernon Knight. In a short time they were married and struck out to the West Coast for a future in California. They lived for a time with Charles' mom Hester Knight. She owned property just down the street here - Flower Street in Bellflower. There was a tiny, converted garage on the property which they called home. After the birth of their daughter Linda Sue they moved to the couple's lifelong home on Carfax Ave in Bellflower. Frankie was a homemaker for all of her early life soon welcoming sons Leslie Charles and a few years later Steven Craig. She was active in all family get togethers, in the PTA, brownies, girl scouts, cub scouts and Little League. She loved cooking and her specialty dish - always requested for most special events - was tacos. Another passion was arts & crafts and sewing. She often added to the family income sewing clothes for friends and creating many beautiful dresses for weddings. A few holiday seasons found her working at the Mission Pak store in Bellflower. She loved being a homebody and also loved welcoming family when they would visit California. Each year she did all the "hard work" for family vacations. All the hard work EXCEPT the driving. There were camping trips, trips to Arkansas and other eastern coast states to visit family and many trips to Oregon to visit friends. As years passed and Charles' health declined she cared for him and they spent a lot of their time in Imperial County at their trailer fishing at Salton Sea Beach. Here she got to spend lots of time with her beloved friend, Pam. After Charles' death Frankie got at a job at Bellflower Kmart. She began dancing - Ballroom and square dancing were favorites. While doing so, she met the 2nd love of her life Vern Bremer. They married and shared a special home in, of course, Bellflower. For 18 years they enjoyed their home, the special beautiful patio, with Frankie tending her lush yards and gorgeous roses. Grandchildren, great grandchildren, in laws & extended family visited often though not enough for her. Sadly, upon Vern's death in 2018 Frankie's own health began to decline. She moved reluctantly to care facilities where she was lovingly cared for by Nora and Evelyn. The last year or two were difficult as many of the ailments that challenge 90 year old's challenged her. She tried not to let it dampen her spirit. She surely missed her Bellflower homes and having things HER WAY. Frankie was loving, caring and worried far too much about EVERYTHING. Somewhere in heaven right now she is repeating her favorite mantra...BE CAREFUL! She is survived by her children Linda, Leslie and Steven. Her grandchildren Christy, Steven, David, Lauren, Timmy, Elisabeth, great grandchildren Tommy, Cameron and Bryson, her sons and daughter in law, her beloved friends Pam, Nora and Evelyn. Fond memories and expressions of sympathy may be shared at www.whitesmortuary.com for the Bremer Knight family.
See more See Less

In Memory Of Frankie Knight Bremer