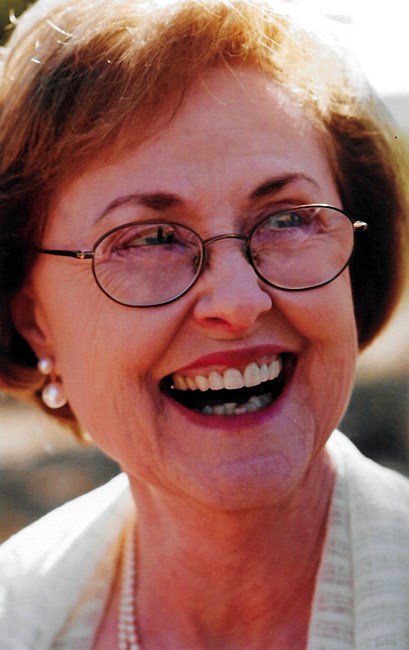 * * * * Patricia Mays Folkerth died July 30, 2022, at her home in Dallas after a months-long battle with colon cancer. She was 87 years old. Pat was born September 29, 1934, in Texarkana, Arkansas, to Sam and Lurline Mays. In her early years Pat and her family lived everywhere from California to Oregon to Texas, following her father during his World War II military service. As a military kid, Pat became skillful at making new friends wherever she landed. After the war the family moved back to their hometown of Atlanta, Texas, where Pat graduated high school. Pat was the first in her family to go to college and was a proud SMU Mustang, Class of 1956. She taught middle school English in the Dallas area for four years. Bless her heart. While teaching Pat lived in apartments in what is now the “Uptown” area of Dallas. It was there she met a young aeronautical engineer from Cincinnati, Ohio. She started going to basketball games just to catch his eye. Dick Folkerth and Pat dated for several years before marrying in June of 1960. Their marriage lasted 55 years until Dick’s death in 2015. Pat and Dick settled first in the Preston Hollow area of Dallas and later in far North Dallas, bordering Richardson. They had three children—Eric, Dianne, and Linda. When her children were young Pat stayed home, taking a keen interest in their activities. She was a Scout leader, a youth sports volunteer, a PTA volunteer and a classroom “room mother.” The family spent many iconic summer vacations at the YMCA of the Rockies, Estes Park, Colorado. She was especially close to her sister Sandra Mays Guthrie and her three daughters, Melinda, Andrea and Melanie, who lived nearby. Pat had a second career as a legal assistant. She went back to school to become a paralegal and worked for almost a decade for the Dallas law firm of Baron and Budd. She traveled across the country interviewing clients, doing legal research and assisting the firm’s work in environmental litigation, including landmark asbestos cases. Pat became head of the firm’s Tech Files Department, which grew from one small closet to almost an entire floor. Pat and Dick built a lake house on Callender Lake in East Texas in 1997. It became a refuge from the big city, a space for the family to gather and be together outdoors. The family spent many weekends and holidays there together and she loved hosting, saying, “Let’s go out and have a glass of wine on the porch.” After retirement they traveled abroad and enjoyed trips to visit their children’s families across Texas in Dallas, Austin, and Houston. She took special pride following the activities of their four grandchildren. Pat moved to an apartment at Highland Springs in 2017 after Dick had passed away. She spent her final years once again making new friends and enjoying life. She loved riding the bus to Austin and Houston to see her family and still traveled to places like Colorado and Scotland. Everyone who knew Pat described her as one of the kindest and warmest humans they knew. She truly cared for her large circle of friends. She said she knew what it was like to “always be the new kid” and that’s why she reached out to people. Pat wrote thoughtful cards to grieving friends, kept trusted confidence for those who were suffering and invited anyone to join her family’s Thanksgiving table. She is survived by her son and daughter-in-law, Eric Folkerth and Dennise Garcia of Dallas, granddaughter, Maria Folkerth of Denton; daughter and son-in-law, Dianne Folkerth and Chris Parker, and grandson, Theo Parker, of Austin; daughter and son-in-law, Linda and David Elmer, and grandchildren, Sam and Addie Elmer, of Houston. She is also survived by beloved nieces and their families. A memorial service honoring Pat’s life will be held Saturday, August 13, at 3 pm, at Northaven UMC. A private family graveside service will be held prior. Pat’s family will host a gathering for family and friends at the home of Eric Folkerth and Dennise Garcia on Friday, August 12. Please contact the family for details. Let’s raise a glass and watch the sun set in memory of Pat. Flowers or memorial contributions are equally welcome. Pat strongly supported the fight to cure breast cancer and the Breast Cancer Research Foundation, bcrf.org.
See more See Less

In Memory Of Patricia Mays Folkerth