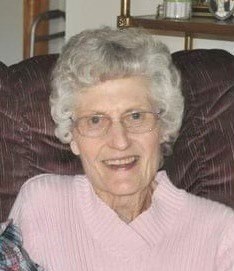 CARPY, Donna Jean (Age 93) – Passed away September 22, 2022 at Lincoln Hospital Transitional Care in Davenport, WA. She was about 10 days from turning 94. Donna was born to Elwood and Minnie Turner on October 1, 1928. She grew up on the family farm south of Harrington and attended all 12 years of school in Harrington graduating from Harrington High School in 1946 as the valedictorian of her class. In the spring of 1946 a new concrete grain elevator was being built in Harrington. One of the boys, George, had just returned from the war and was working on the construction. This is where Donna met George, dated and married on June 12, 1948. They both pursued their college education attending and graduating from Washington State College, now Washington State University. After graduation, they moved to Bremerton where George was hired as a journalist for the “Bremerton Sun” newspaper and Donna used her business degree to work at “Keyport Torpedo Station.” Daughters Kathy and Bonnie were born in Bremerton. After six years in Bremerton, they moved back to Harrington to work on the family wheat farm. Donna enjoyed being involved in the harvest and had a strong work ethic. The outdoors was her happy place and she loved the land. For many years, they were involved with cattle ranching. It didn’t matter if it was a cow, cat, dog, animals were loved. She enjoyed gardening and made it a priority to spray and pull weeds. She especially enjoyed going back to the farmhouse where she grew up. When Lincoln Hospital was built, she took some classes to become a nurse’s aide. It was rewarding to her but there was a position that became available at the Harrington Post Office so her direction changed. After years of working at the post office, Donna became the Postmaster in 1980 and later retired in 1994. Donna had a long full life doing what she loved. She was a small town girl that wouldn’t have it any other way. There was a love for little people as you could see her light up when the great grandkids came to visit. She was able to live in her home in Harrington right up to the last few months. There were wonderful caregivers that helped her along the way at home and in transitional care. We appreciated each and every one. She is survived by her daughter Bonnie (Alan) Stone, three granddaughters Jennifer (Jon) Fischer, Michelle (Mark) Siadal, Sara (Jeremiah) Koeller, six great grandchildren Brody Hendrickson, Carson and Tucker Siadal, Karlie, Parker and Ellie Fischer and brother-in-law Leonard Davis and nephews and extended family. She is preceded in death by her husband George Carpy, daughter Kathy Carpy and her parents Elwood and Minnie Turner and her sister Virginia Davis. A family memorial service will be held at a later date. Memorials may be made to the Harrington Fire Dept. & EMT’s, PO Box 665, Harrington, WA 99134 or the Hillcrest Cemetery Endowment Care Fund, PO Box 492 Harrington, WA 99134. Fond memories and expressions of sympathy may be shared at www.strate-funeral.com. STRATE FUNERAL HOME, DAVENPORT, WA is caring for the family.
See more See Less

In Memory Of Donna Jean Carpy