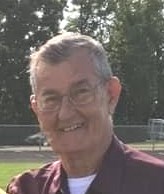 Joseph L. “Joe” Carnahan, Sr., 76, of Orland, Indiana, passed away on Thursday, May 12, 2022 at Northern Lakes Nursing & Rehabilitation Center, Angola, Indiana. He was born on August 5, 1945 in Angola, Indiana, to Harold and Mildred (Closson) Carnahan. He married Nancy L. Giver on August 24, 1963 at St. Anthony Catholic Church in Angola, Indiana. Joe worked many jobs over the years including being a truck driver, a baker, and a handy man. His hobbies included fishing, hunting, and being outdoors. Survivors include his wife, Nancy Carnahan of Orland, Indiana, a daughter, Carissa (Curtis) Glasgow of Bristol, Indiana, a son, Joseph L. (Laura) Carnahan, Jr. of Orland, Indiana, 9 grandchildren, 11 great-grandchildren, and brothers, Jerry (Shirley) Carnahan of Hudson, Indiana, and James (Vicky) Carnahan of Angola, Indiana. He was preceded in death by his parents, and a brother, Richard Carnahan. Visitation will be held from 10 am until 12 pm Monday, May 16, 2022 at Beams Funeral Home, Fremont, Indiana. A Funeral Service will follow at 12 pm Monday at Beams Funeral Home, Fremont, Indiana. Chaplain Cheryl Hayes will officiate the service. Burial will be at Greenlawn Cemetery, Orland, Indiana. Memorial donations in his memory may be given to the Orland Fire & Rescue.
See more See Less