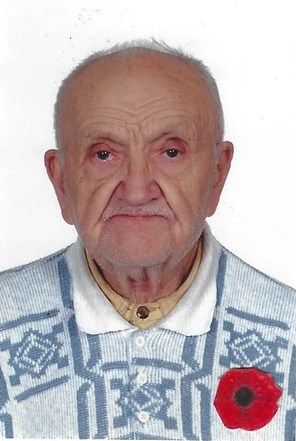 With deep sorrow our family announces the passing of a dedicated husband and loving father on January 15, 2023. Antoni would have been an amazing 102 years old in one more month; the last of 12 siblings. Husband of Helena (predeceased). Cherished and devoted father to Anna (William “Bill”-Predeceased) McKee, Margaret(predeceased), and Edward. Grandpa to Ryan, Bradley, Eric, Jessica and Anthony and great-grandpa to Raine. Antoni was a WWll Veteran and long time member of the Polish Legion and a long time employee of Hamilton Street Railway which he retired from. Antoni was truly a person with so much courage and determination. He outlived so many friends and family and saw so many changes throughout his life. Somehow, he survived the forced labour and concentration camps that he escaped from Siberia to join the Polish Allied Forces in USSR under British Command. After crossing the Russian/Persian border, with his unit, he came under British Command in the Middle East. He served in the Middle East, in Italy in the battle of Monte Casino, one of the most important battles of WWll and the United Kingdom. The Monte Casino Battle was a testimony to Polish bravery and sacrifice. Polish soldiers who fought at Monte Casino were not just ordinary conscripts, drafted and sent to Italy, where tragically many soldiers, including those in the Polish army, perished. It was a horrible battle. Antoni was forcibly removed from his home along with his siblings at night time, when his family was sleeping in Poland, and sent to labour and concentration camps in Siberia. He endured near starvation, escaped through the wilderness, on foot through bitter coldness, illness and threats of being killed. He somehow made it to Iran, to join the Polish Forces under British Command as part of the Allied effort. .He was honourably discharged after serving for 6 long horrific years of battles. It is amazing that he survived such atrocities. Regardless of such horrible memories, he continued on with such zest and a mindset for life never taking it for granted. His simple and enduring nature made him a true survivor that everyone should learn from as he was truly an example of great perseverance. He never gave up and said “to keep on moving and find something constructive to do to stay busy.” He always tried to make the best of life by taking it in stride. A sincere thank you to the staff of Parkview Nursing Home for their care and compassion. A visitation will be held at Markey-Dermody Funeral Home, 1774 King Street East, on Friday, January 20, 2023 from 2-5 p.m. Prayers at 3 p.m. A Funeral Mass will be held at St. Stanislaus Polish Catholic Church, Hamilton, on Saturday, January 21, 2023 at 10:30 a.m. Interment to follow at Our Lady of the Angels Cemetery 681 Mud Street E in Stoney Creek. Antoni came to Canada with a suitcase, no money and his accordion that he got in Italy, which he used to entertain and keep up the spirits of his fellow soldiers and even family and friends over the years, while telling us stories of life in the olden days, so we can appreciate what we have today. He came to Canada for a fresh start with open arms and helped all kinds of people in need. Therefore, we would want his legacy to persevere, not by any monetary donations, instead by asking that everyone reflect on all their blessings, spread kindness to each other and spread the message of love instead of hate, and learn from the horrific aspects of WWll to make this world a better place to live and in memory of the sacrifices people went through of the unfathomable atrocities.
See more See Less

In Memory Of Antoni Dubiel