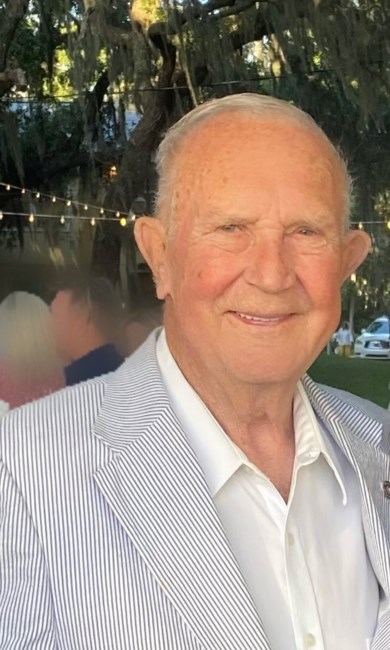 William ("Bill") Earl Easterday, known lovingly as "Grandpa" passed away peacefully on January 21, 2023. Bill was born in Knoxville, Tennessee on April 25, 1933. He was very proud of his Tennessee roots, and in fact, attended the majority of the Vols football bowl games since 1960. The Smokey Mountains is also where he developed his great skill and passion for fishing. Raised by his loving parents, Millie and Earl, Bill was the oldest sibling and enjoyed a very strong bond with his brother Bob and sister Sue. He attended the University of Tennessee through ROTC where he received his bachelor's degree in mechanical engineering. Upon graduation, Bill served as an Officer in the US Air Force. In 1956, his military duty took him to Colorado where he met the love of his life, Della Wilkins, on a ski slope in Loveland Pass. On August 14, 1957, they married. Together, their Christian-based marriage of 63 years was an extraordinary inspiration to many. Bill and Della moved to Jacksonville, Florida in 1959 where he began his career with Cutler Hammer. As a testament to his loyalty, he ultimately retired from this same company after 40 years. Bill and Della had a passion for travel which took them to most of the 50 states as well as many countries around the globe. As history enthusiasts, they also visited all the major Civil War battlefields. Bill enjoyed cooking and was known for his signature hand-carved garnishes made from fruits and vegetables. He also had a love for dancing, and when the music started there was no stopping him. Bill and Della also became top players in duplicate and party bridge as well as accomplished mixed doubles partners in the Arlington area. Their opponents feared Bill's wicked cut shot. Undoubtedly, his favorite pastime of all was fishing. Some of his fondest memories were fishing with his Dad, Earl, as a son, followed by fishing with his son Billy, as a father. At age 88, he commented, "you'll know I'm still healthy as long as I'm fishing". Bill's love for life and Christian-based heart was reflected in his role as a loving husband, incredible father, caring grandfather, and great friend. His humble wisdom and gentle spirit touched so many lives. As a lifelong Methodist, Bill was an Administrative Board member for several Jacksonville United Methodist churches. He always had a special bond with Pastor Jerry Sweat and enjoyed worshipping with his Beach Church family until his final days. He was a former member of Jacksonville Quarterback club, a longtime member and past President of Arlington Rotary club, and a child mentor and substitute teacher in St. Johns County. Billy and Vickie would like to say "thank you" to Grand Living at Tamaya, Mayo Clinic, River Garden, and Community Hospice for the wonderful loving care they provided their father. Bill is survived by his son Billy Easterday, daughter Vickie Pappas, grandchildren Tyler, Tanner, Abby, Tori and Trey, and brother Bob and sister Sue Nelson. Bill is predeceased in death by his wife of 63 years Della Easterday. On Monday, January 30 at 11:00 am there will be a memorial service at the Chapel at Beach Church, 325 7th Ave. North, Jacksonville Beach, followed by a reception on the church campus. In lieu of flowers, donations can be made to Beach Church or Community Hospice in Jacksonville, FL.
See more See Less

In Memory Of William Earl Easterday