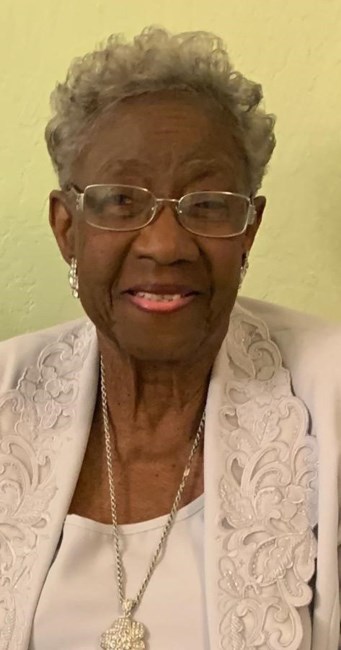 On May 7, 2022, Lurlene E. McDaniel Burditte got her wings after a brief illness, and went to walk with the angels. She was 99 years old. Born in Tulsa, Oklahoma, on September 3, 1922. Lurlene received Christ at the age of 12 and was baptized at Paradise Baptist Church, Tulsa, Oklahoma. Lurlene has one sibling, Charles Edward Camper, who predeceased her on October 3, 1991. She attended and graduated from Booker T. Washington High School, Tulsa, Oklahoma. She was a big fan of football and basketball. Lurlene continued her love for the games and remained a sports enthusiast. Lurlene was a member of bowling leagues for over 40 years. She received many awards and accommodations for her bowling skills. Lurlene married Charlie Woodson Burditte on December 31, 1950. She was known to be an exceptional wife and mother. To this union they had one daughter, Renee Burditte Nubia. However, many people considered Lurlene their surrogate mother. She cared deeply for her family and friends. In 1942, Lurlene located to San Diego, California, and united with Calvary Baptist Church. She was a faithful servant. Also, she moved to Los Angeles, California, where she joined and worshiped at St. Paul Baptist Church under the leadership of Pastor John L. Branham. One of her favorite scriptures was Psalm 24:1-7. As a resident of California, she found employment. She became the first black woman to test spark plugs on airplanes. Lurlene was employed by the Aerospace Industry at the Naval Air Station, North Island. She held additional employment in the areas of retail sales, a window decorator, practical nurse and Home Health Care for 23 years and retired in 1997. After retirement, Lurlene located to Las Vegas, Nevada, in 2012. Lurlene resided with her daughter (Renee) and her son-in-law (Donald). She united with Evergreen Missionary Baptist Church under the divine leadership of Rev. Dr. Welton T. Smith III, Senior Pastor and First Lady Reverend Debra Smith, where she’s been a faithful member for 10 years. Throughout the years Lurlene served on many committees, organizations and held leadership roles, such as Bella Donna Civic, Charity Club, President of the First Aide Nurse’s Club, President of the September Birthday Club, Women’s Chorus, and a Deaconess. Lurlene’s husband Charlie Woodson Burditte predeceased her. Family: Mrs. Burdette has outlived her primary family. Eight months into her 100 years, she was greeted in Heaven by a host of relatives and friends. Mrs. Burditte leaves to celebrate her life a daughter, Renee Nubia; and son-in-law, Donald Nubia of Las Vegas, Nevada; one cousin, Bennie Peevy Jr., Tulsa, Oklahoma; one God son Dr. Thaddeus “Sonny” Dillard (wife Colleen) Palmdale, California; Lorraine Dillard, Los Angeles, California; Reverend B.J. Jenkins and Shirley Dean, Las Vegas, Nevada; and a host of friends and church family. Acknowledgements: Caregivers: Ms. Francis King (10 years), Jamika Hines - Caring Friend Home Health Care (4 years). Host Physicians: Dr. Howard Coker, Primary Physician, Dr. James Mock, Cardiologist, Dr. Takieddine, Nephrology, Dr. Sanchez, Oncology. Palm Northwest Mortuary, 6701 North Jones, Las Vegas, Nevada 89131. Inglewood Park Cemetery, Inglewood, CA 90301. Fond memories and expressions of sympathy may be shared at www.palmnorthwest.com for the Burditte family.
See more See Less

In Memory Of Lurlene E Burditte