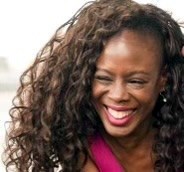 She was born in Washington, DC, to her late parents Lenne (Stuart) and Olatunde Fasina. After a short stint in California, she and her mother settled in New Jersey, where Anthea graduated from Elizabeth High and went on to Union County College. During this time she worked as a promoter for several famous NYC dance clubs. While working as a bank teller in Elizabeth, she was approached by a high-ranking police officer of the Elizabeth Police Department who encouraged her to apply for a 911 dispatcher position. She fell in love with this job and worked as a First Responder / Public Safety Telecommunicator for over 22 years, where she also volunteered as a union shop steward. Even though the job was very stressful, she took a lot of pride in being able to help people in life-or-death situations, amongst others a hostage situation in a warehouse, a machete attack, and countless suicidal callers. She received several commendations for outstanding work when she saved people’s lives. All the coworkers and first responders at police, fire, and EMS thought she was a joy to work with. The City of Elizabeth honored her years of service by flying the United States Flag at Half-Staff after her passing. Her passion was always music and dancing. Growing up, Michael Jackson was her hero, and later she was the happiest at a party where house music was played and she would dance all night long. Music was her medicine, her comfort, and her source of joy, and it was always around her. Wherever she went, she had a notepad ready on which she would write down songs that she heard and wanted to get. Her love for fashion, design and home decoration made her one of the most stylish girls around, and her self-designed nails were the envy of both her girlfriends as well as random strangers. The interior of the condo where she lived with her husband perfectly expressed her colorful and stylish taste because she meticulously planned and designed it herself. This passion for design was reflected in her love for home makeover shows, where she would passionately judge the work of the designers. Being a master channel flipper and commercials avoider, she was able to simultaneously watch the other genres she liked: Travel shows and True Crime. Be it “Wives with Knives” or “Snapped”, she watched them all. Her husband always wondered how she would relax after a hard day of 911 work by watching shows about real murders. She did not like scripted shows, as they portrayed her work at 911 unrealistically and even made her job harder. She often had to explain 911 callers who watched too much CSI that “No ma’am, we are not coming to take fingerprints when your car was broken into at the mall” Anthea loved sending cards and finding the perfect gifts for her friends and coworkers. She spent a lot of time thinking of her friends’ likings and what would make a great gift for each individual. Every one of the 40+ coworkers at the police department also received a card and a small gift from her each Christmas. As a foodie, she loved exploring new foods and restaurants, especially seafood and was always on the lookout for new places to discover. Anthea enjoyed firework displays, especially the annual 4th of July show in NYC, movies, and Broadway shows, and she adored cute animals and pistachio ice cream. She also loved traveling. Her favorite destinations were Portugal and the Caribbean (Cuba, Jamaica and Aruba), ideally to get away from the cold weather in NJ. She also treasured her plentiful memories of places like Paris, Verona, Guyana, London, The Grand Canyon, Amsterdam, Hawaii, Germany, Switzerland, Antelope Canyon, Monument Valley, New Orleans, Martha’s Vineyard, Montreal, San Francisco, and Napa Valley. In 2004, fate pulled out the love card for Anthea. With much reluctance, she accompanied her friend Harold as his wing-woman to a birthday party in NYC on a rainy Thursday evening. At the party, her future husband Robert and Anthea happen to sit at the same table with all of their friends. Being smitten but shy, Robert wasn’t able to talk to her at first. After watching her on the dance floor for some time, he finally gathered up the courage to offer her a drink. (Nonalcoholic, of course). The night continued with talking, dancing, and finally exchanging of numbers. Robert called her the next day and that was the beginning of a true love story. The love Anthea and Robert have for each other goes beyond anything you would find even in the most romantic book. Their relationship is the epitome of unconditional love. Anthea was a true friend to countless people who she always genuinely cared about and wanted the best for them. She will be remembered as being the most generous and giving person. Following the cremation and her wish, Anthea's ashes will later be attended by a small circle of her closest family and friends. Anthea wanted us to remember her as the positive and happy person that she really was. In the end, she was stuck with a serious chronic health conditions. She didn't want to burden anyone with that knowledge and didn't want to be remembered as a sick person. I will be honoring her wishes and not talk about the short time she was sick, but the long time she brought joy to everyone. I know that everyone has so many questions, but I am asking you in her name to please refrain from inquiring about the details of her passing. Thank your understanding in this matter. For those that can't make the visitation, there is a Zoom link provided for all to attend. 9089658942- Meeting ID Passcode- 8888 Visitation for Anthea will be held Friday, January 27, 2023, 5:00 PM to 9:00 PM and Saturday, January 28, 2023, 2:00-6:00 pm at Krowicki McCracken Funeral Home, 2124 East Saint George Ave, Linden, NJ 07036. Fond memories and expressions of sympathy may be shared at www.krowickifuneralhome.com for the Fasina-Stapf family.
See more See Less

In Memory Of Anthea Abiola Fasina-Stapf