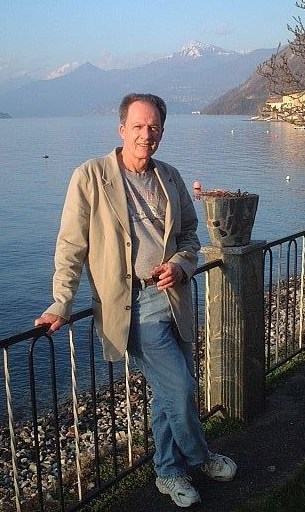 John Paul Osman, most recently of Wayne, IL, died July 16, 2019, with his family by his side. John was born on November 1, 1940 in Miami, Florida, to John Paul Osman, Sr. and Eileen Copeland. Known as “Jack” to his siblings, he joined the U.S. Navy at 17 years of age on the U.S.S. Guadalupe, traveling across the Asian Pacific for 6 years. He had a great love for this country and his fellow Americans, enjoying lively political discussions about equality and social justice. Jack’s love of the sea continued past his service when he decided to buy a sailboat. It wouldn’t be his only boat or the only vessel that he would command, later earning his pilot’s license. Navigation-related hobbies aside, he was quite fond of golfing, enjoying multiple rounds each week in his retirement. A savvy entrepreneur, John capitalized on the opportunity to specialize in computer programming, a decision that eventually led to the creation of his own software company, Independent Systems. He ran the company for 20 years with a team of 15 employees, until he eventually sold it off to a big name in the industry: Avalara. In the latter years of running Independent Systems, he was proud to bring his only son on board to help grow the company. John spent his young adulthood in Chicago and he loved being in the city. It was in Glen Ellyn that he met his loving wife, Kathy. He made many trips back to his home state of Florida throughout his life, earning him the fond title of “Gator”, eventually purchasing a home in Sarasota to split his time between his two favorite places. While married to Kathy, he also owned and frequented properties in Nova Scotia, Canada, and Myrtle Beach, South Carolina. He loved to travel, especially to Europe. Gator was fiercely independent to the point that many thought he was 10 years younger than he actually was. He lived a vibrant life with no regrets at the end. He is survived by his loving wife Kathy; children from his first marriage, John Patrick Osman and Jennifer Delgado; his daughters Maddy Osman and Darya Osman; grandchildren, Jason and Ryan Gramins, Gabriella Delgado, and Ella Grace Schmidt; siblings Lloyd Osman, James Patrick Osman, Linda Richard, and Barbara Bartel; as well as many loving nieces and nephews. In lieu of flowers, donations may be sent to Family Reach Foundation, an organization that Gator actively supported during his life: https://familyreach.org/
See more See Less

In Memory Of John Paul Osman