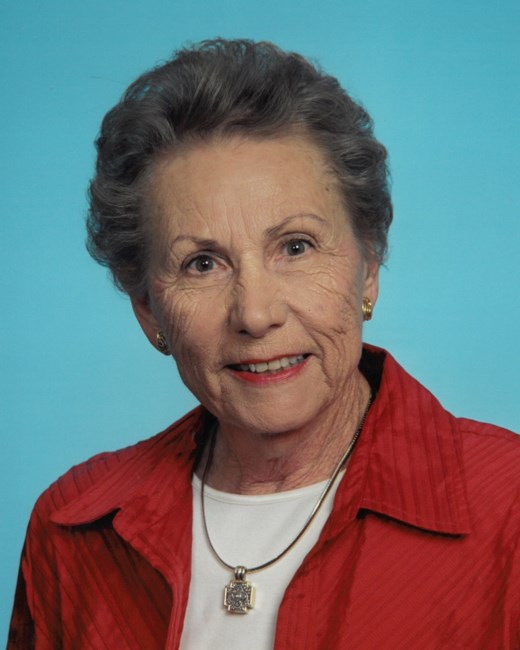 Evlyn Wise DeZonia, age 97, passed away peacefully on May 11, 2022 in Memphis, Tennessee surrounded by her loving family. Evlyn was born on January 3, 1925, in Shreveport, Louisiana, daughter to James Benjamin and Maude Evlyn (Wortman) Wise. She was baptized at St. Vincent’s Catholic Church. While attending C.E. Byrd High School, Evlyn was on the newspaper staff and earned Top Saleswoman selling ads, which was an excellent foundation for her future work in real estate. She was proud to be a member of ROTC, where she marched and trained in much the same way that women in the armed forces did. After graduating in 1942, Evlyn attended Centenary College and worked at Barksdale Air Force Base. There, she met a tall, handsome Army Captain from Memphis named Gerald Leo DeZonia. Evlyn and Jerry married on December 3,1944 and shared 49 joyous years together until his death in December of 1993. Army orders initially settled the young couple in Clearwater, Florida. After WWII, they came to Memphis to start a family and raise four daughters. Evlyn was an active member of Holy Rosary Catholic Church since 1959. She was a devout Catholic, a member of the Legion of Mary and Altar Society, and served as a Eucharistic minister to the sick. Evlyn, Jerry and the girls enjoyed many adventures together and she was totally devoted to the activities of her daughters, leading Girl Scouts and designing dance costumes, while they attended Holy Rosary School and Immaculate Conception High School for Girls. Evlyn was a whiz at sewing, cooking, gardening, square dancing, and RV camping with the family all over the United States. As if that was not enough, in 1965, Evlyn earned her real estate license. She found her calling to assist clients of all ages and walks of life to find their dream homes. While her children were at school, she was busy showing houses, carefully scheduling appointments in order to arrive home in time to greet her daughters, assist with school projects and prepare home-cooked meals for her family gathered around the dinner table. Described by her grandchildren as “tenacious and ambitious”, Evlyn was chosen to be the first female recipient of the Memphis Board of Realtors “Sales-‘Man’ of the Year” award. She launched her own real estate brokerage firm, DeZonia, Phillips, & Irby, and earned lifetime status in the Million Dollar Sales Club. Evlyn later joined Crye-Leike, Realtors, and soon became a top seller for the company. In the process, she and Jerry happily worked together as he became the closing attorney for many of her clients. Evlyn retired from her real estate practice at the age of 93, after listing and selling a house for the son of one of her first clients from 1965. Always an “adventurous” person, Evlyn zipped through her 80’s by snorkeling the Great Barrier Reef in Australia, hang-gliding and zip-lining in Costa Rica, skydiving, cross-country skiing and snow-mobiling in the Rockies, and tubing behind a ski-boat on the Tennessee River with her great-grandchildren. In her 90’s, she proudly caught her first fish. “Mini-Mama” to her 15 grandchildren and 17 great-grandchildren, she influenced them all and is described in their words as: Small in Stature but Big in Love, Dynamic and Upbeat, Wise, Indomitable Spirit, Forgiving, Gracious Host and Fantastic Cook, Spiritual and Prayerful, Family-Focused and Proud Matriarch. Evlyn is survived by her four daughters, Benlyn Wade (David) of Memphis, Donna Lewis (Michael) of Springfield TN, Gere’ Lynn DeZonia of Memphis and Jules Mason (Richard) of Brentwood TN; her grandchildren, Jenny Wade, David Wade Jr., Julie Kate (Chad) Webster, Matt (Wesley) Wade, Sally Lewis, Dan Anderson, Evlyn (Matt) VanderVliet, Connor Mason, Evan (Helen) Lewis, Clint Mason, Jane Marie (Alex) Brown, Ginna Claire Mason (Eric) Moffett, Thomas Dennie, and Ben (Mallory) Mason; seventeen great-grandchildren and many nieces and nephews. She is preceded in death by her parents, husband, Jerry, sisters Marion Wise Miller and Johnnie Wise Mallory and grandson, Benjamin H. Lewis. A visitation will occur from 4:00 to 6:30 pm at Memphis Funeral Home at 5599 Poplar Avenue in Memphis on May 25, 2022, with a Rosary to follow. A Funeral Mass celebrating her life will be held at Holy Rosary Catholic Church at 10:30 am, on May 26 with a graveside service to follow at Memorial Park Cemetery, also on Poplar Avenue. In lieu of flowers, memorials may be made to Holy Rosary Catholic School (holyrosarymemphis.org), Juvenile Diabetes Research Foundation (jdrf.org), and Children’s Tumor Foundation (ctf.org). Fond memories and expressions of sympathy may be shared at MemphisFuneralPoplar.com for the DeZonia family.
See more See Less