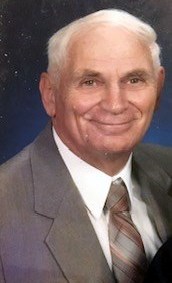 Pingry Finley Glenn Jr. was born on June 3, 1935 to Era Frances and Pingry Finley Glenn Sr. in Memphis, Tn. The family moved around the Memphis area until eventually settling in Bolton, Tn around 1947. Pingry Sr. was a farmer, and taught his sons, Finley and Marver, all about the farming way of life. Finley was more interested in farming than his brother; it was all he ever wanted to do. He would go on to pass his knowledge down to his two sons. Finley attended Bolton School (now Bolton High School) beginning in the 7th grade, going on to graduate in 1953. While there, he met Nancy Ann Sanders. In his own words, she was “the sweetest, greatest lady you’d ever meet.” They married on November 6, 1953, while Nancy was still a senior in high school. They welcomed their first daughter, Deborah, in August of the following year. They began to make their lives in Rosemark while welcoming another daughter, Carol, in 1957. In 1959, Finley moved his family to Frayser. He worked at Firestone during this time, had a tire retread shop, G&G Tire Co., and also worked at Cargill. He and Nancy welcomed their first son, Howard, in 1959. While expecting their second son and last child, Steve, the family moved back to Rosemark in 1965. The house the couple bought would be the one they would raise their children in, help raise grandchildren, host hundreds of Sunday lunches, and countless dinners until it was demolished in 2010 to make way for highway expansion. Finley also began working at Dupont in 1968, where he would retire from in the early 2000’s. The couple’s favorite pastime was camping. They were a part of The Rosemark Camping club, or The Roadrunners. They, several close friends, and on numerous occasions, family would set off to enjoy the great outdoors at several campgrounds around the south. The club even made a trip out west in 1987. Nancy was diagnosed with Alzheimer’s in the early 2000’s. Finley cared for her selflessly until the time came, she required a higher level of care and was moved into a nursing facility. Because she was no longer living in the same house, he would drive to visit her at least twice a day, no matter the weather. He would sit with her, pray with her and even spoon fed her when she could no longer feed herself. He was by her side the day she was called Home on July 11, 2017. He continued to visit her at her resting place twice a day, until he could no longer drive. Their love was magical to all who were blessed to see it. His life was filled with so much love, so many stories and adventures, it would take a book to recount them all. He has been described by many as the strongest, funniest, kindest, most generous, and caring man most have ever had the privilege to know. He loved his family with a passion that is indescribable. Above all else, he was a man of God. He loved God fiercely and unapologetically. He strived to live his life by and spread the Word every chance he could. Finley left a lasting impression of countless lives and a definite mark on the world. He will forever be missed. He is survived by his daughters, Deborah Glenn of Rosemark and Carol Shields (Ricky) of Bartlett; his daughter-in-law Melissa Glenn of Rosemark; his grandchildren Wendi Glenn of Bartlett, Ashley Gillihan of Memphis, Angela Glenn of Raleigh, Blake Osborne of Rosemark, Kari Kent (Ronnie) of Arlington, Elizabeth Glenn of Bartlett, Jessie Glenn of Memphis; his grandson-in-law William Clayton of Rosemark; 19 great-grandchildren and 3 great great grandchildren. He is preceded in death by his parents, Era Frances and Pingry Glenn Sr., his wife Nancy, his sons Steve Glenn and Howard Glenn, his granddaughter Kala Clayton, and his brother, Marver Glenn. Services for Finley will take place at Richland ARP Church in Rosemark and are as follows: Visitation Thursday evening, May 12, 2022 6-8pm. Funeral: Friday May 13, 2022, immediate family visitation at 12, open visitation at 1 with services beginning at 2. Burial to follow at Rosemark Cemetery. Fond memories and expressions of sympathy may be shared at www.FamilyFuneralMemphis.com for the Glenn family.
See more See Less