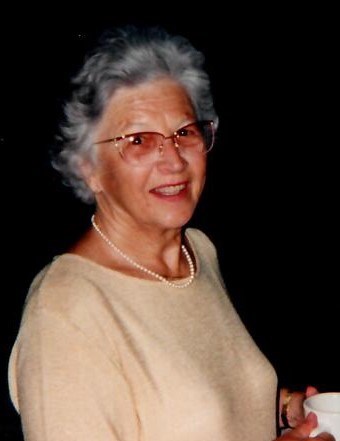 Elisabeth was born in Bienne, Switzerland on January 19, 1922 to Clara Harnischberg Althaus and Paul O. Althaus. She was educated in Zurich, received her baccalaureate and attended Zurich University. During the last war years, she worked in Geneva with the Swiss Red Cross, bringing convoys of sick children out of the occupied countries.

In 1946, after a wartime courtship, Elisabeth married Ralph. They lived in Switzerland, where Ralph worked in the fledgling advertising industry. They moved to the States in 1949, and lived in Connecticut with their three children, before moving to London, England. After Ralph’s retirement in 1971, they lived in Goudhurst, Kent and then on Cape Cod, first in Harwich Port and then Orleans.

Elisabeth enjoyed gardening, needle point, bridge and travelling. She had many friends, and enjoyed the meetings of the “Stitch and Bitch” club and the “French Group”. She volunteered at the Snow Library mending books and was very active in her parish, St. Joan of Arc. She worked at their Thrift shop, with the St. Vincent DePaul Society and as a Eucharistic minister for the sick. She organized the Friendly Visitors program, for which she was awarded the Marian medal.

Elisabeth was a remarkable woman who lived her 96 years with elegance, style, strength and humor. She endured tragedies, such as the death of her son Martin, with grace and grit.

The family would like to extend their sincerest thanks to VNA hospice and Visiting Angels for their care and devotion. To Bonnie, Dana and everyone at the Terraces, Elisabeth and her family are forever grateful.

A funeral mass will be held at St. Joan of Arc Church in Orleans on Monday, February 19th at 11 am. Burial to follow at the Orleans Cemetery. Donations may be made in her name to VNA Hospice of Cape Cod or the St. Vincent DePaul Society or a charity of your choice.

In Memory Of Elisabeth M. Rewcastle