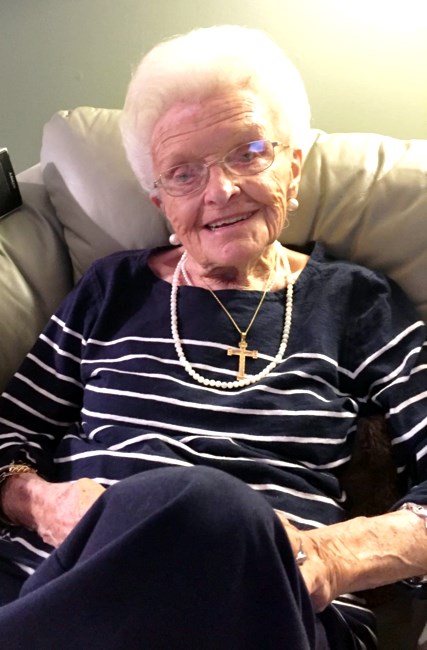 Rosemary Madeline Feeley Neuert, 99, of Eastham, MA., passed away January 24, 2017, in Brewster, MA, after a brief illness. She was born November 17, 1917 to Augustus L. and Helen Feeley, in the back bedroom of their home in Harrison, N.J. She was so small at birth that she was put in a blanket-filled box and set on the open door of the family’s kitchen coal stove for extra warmth. She survived to live a long life filled with determination, kindness, and faith. “Little, but oh my” was the phrase the family used to describe her in childhood; it applied throughout her life. Rosemary grew up in Harrison, along with her younger sister, Gertrude, and brother, Robert. She attended Holy Cross Grammar School, Benedictine Academy, and Chestnut Hill College of Philadelphia. She remained close to many of her classmates for the rest of their lives. Her college years were cut short by the death of her beloved father in 1937. She then went to work in Newark, N.J., and later met the love of her life, W.R. “Bill” Neuert. They were married in June of 1943, just before Bill shipped off to serve with the U.S. Navy out of Pearl Harbor. Not inclined to let even a worldwide conflict separate her from her loved one, Rosemary secured a job with the Navy in Honolulu, and set out across the continent by bus and train, only to be stopped at the Navy Pier in San Francisco by an officer wielding the regulation that no wife was allowed within the theatre of war of her spouse. So, instead, Rosemary got a job and settled in Los Angeles to be as close as possible to her husband. After the combat death of her brother Robert in France in 1944, she returned home to Harrison, and along with her sister Gertrude, cared for her mother, until Helen’s death in 1962. Her sister, Gertrude Feeley Swenson, died in 2011. After the war Rosemary and Bill settled in Harrison. They raised four children there and in West Caldwell, N.J. Starting in the late 1960's she worked at Hahne’s department store in Montclair, N.J., eventually managing their fine china, glass, and giftware department. She and Bill retired to Eastham in 1984. He predeceased her in 2004. She made many close friends on Cape Cod, especially through her church: neighbors Anny and Gene Morel were especially close. She was a longtime volunteer at her parish thrift store, and an avid book club member. For the last twelve years, she split her time between her home on the Cape, her daughter’s home in Connecticut, and her son Bill’s in Pennsylvania, with visits to family in Vermont in mid-summer and Christmastime. She celebrated her 100th Christmas last month, in Vermont. Her survivors include her daughter Roberta and her husband John of South Windsor Ct., three sons, Willard R. Jr. of Bethlehem, Pa., John L. of Dumont, N.J., and Edward J. and his wife Natalie of Richmond, Vt.; four grandchildren, Michael Gilsenan, Kerry Hughes, Harrison Neuert, and Loughlin Neuert; four great-grandchildren, Jack and Mackenzie Gilsenan, and Braeden and Will Hughes; three nieces, Mary Ellen Dunn, Trudy Swenson McKinna and Kate Heinz; and nephew Victor Swenson,III. Visitation is 4 to 7 p.m. Friday, January 27 at Nickerson Funeral Home, 77 Eldredge Park Way, Orleans. A Mass of Christian burial will be joyfully celebrated at 11 a.m. Saturday at St. Joan of Arc Church, Canal Road, Orleans MA. Burial is private. In lieu of flowers donations may be made to the American Macular Degeneration Foundation. For online condolences, please visit www.nickersonfunerals.com

In Memory Of Rosemary M. Neuert