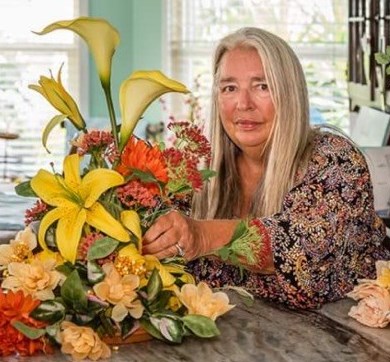 Deborah A. Godsell was born on December 5, 1951 to the union of the late, Donald and Lucille Giedraitis in New Britain, CT. Deborah received her formal education at Pulaski High School in New Britain, CT. She furthered her education at Central Connecticut College in New Britain, CT. She also attended Florida Atlantic University where she completed her Masters in Design. Deborah was a member of Gulf View United Methodist Church. Deborah A. Giedraitis was married to Robert E. Godsell on June 25, 1976 in Pompano Beach, FL. Their union was blessed with five children. She worked as an owner of Lighthouse Point Flower Shop as a Master Designer for 10 years. Deborah enjoyed decorating the life around her with art. One of her favorite activities was creating handcrafts with her friends. The Gulf waters were her peaceful place. She was an avid yard seller, always looking for the next item to recreate. She loved giving back to her community. She was a leader in the Girl Scout, Four H Club and in her neighborhood watch. Deborah was an advocate with Partners in Policy Making, an advocate group for persons with disabilities in Tallahassee, FL. Deborah was preceded in death by her parents; Donald and Lucille Giedraitis; her brother, Charles Giedraitis. She leaves to cherish her memory, her beloved husband, Robert E. Godsell; three sons, Ryon L. Godsell, James Godsell and Brandon Godsell; two daughters, Jennifer Godsell, Michelle Johnson; one sister, Lori Giedraitis. A memorial service will be announced at a later date at Gulf View United Methodist church. In lieu of flowers, the family asks that donations be made to UAB Hospital Cancer Research Center. Fond memories and expressions of sympathy may be shared at www.southernheritagefunerals.com for the Godsell family.
See more See Less

In Memory Of Deborah Ann Godsell