The service for Thomas Needham Park III has been rescheduled for 2:30 p.m. on February 1st, 2022. 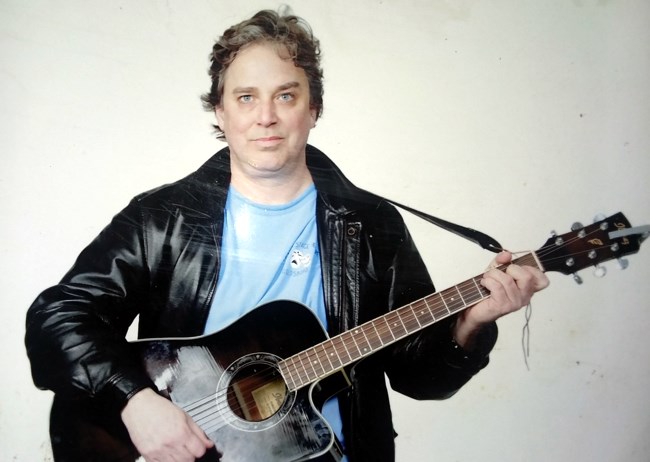 Thomas Needham Park III, 54, originally of Goldsboro died January 13, 2022 at his home in Little River South Carolina. Needham was the son of Thomas N. Park, Jr. (deceased) and Mary Lou Bryan Park. He was born at Fairchild Air Force Base in Washington State and his family spent his childhood living in numerous states due to his father's military career. He eventually lived in the Rosewood area and graduated from Rosewood High and then graduated with a BS in Broadcasting in 1989 from East Carolina University. Needham's musical background began after graduating from ECU. Music was his passion and his refuge. He had a natural talent for music and was in several original bands writing music and lyrics, performing, and recording all over the US and Canada. He played the electric and acoustic guitar and sang background vocals. He worked waiting tables for many years to pursue his music career. His highlight was a major label band and had a temporary relocation to LA in 2000. He was involved in Center Stage Theater in Goldsboro for over 12 years. Some of the highlights include the notorious villain Bill Sykes in the musical, Oliver, and Marley's Ghost in a musical version of A Christmas Carol just to name a few. He received raving reviews for many of his performances over the years. He volunteered with the Optimist Club in Goldsboro refurbishing computers for students in the community. He also taught basic computer classes at the Peggy Seegar's Community Center through Wayne Community College. He was witty and intelligent and had a soft spot for animals, especially rescued cats, kittens, and squirrels. Surviving are his mother, Mary Lou Park of the Meadow Community in Johnston County; his sister, Kathryn Park Barefoot and husband Daniel of Meadow; nephew, Jared Barefoot and wife Caroline; great- nieces, Elliott and Emerson Barefoot of Kenly; nephew, Hunter Barefoot and wife Nicole; great-nephew, Noah and great-niece, Callie Barefoot of Meadow; niece, Caroline Barefoot and great-niece, Sallie Estrella of Meadow. A funeral service will be held on Tuesday, February 1st at 2:30 pm in the mausoleum at Historic Oakwood Cemetery, 701 Oakwood Ave., Raleigh. In lieu of flowers, memorial gifts may be made to SPCA of Wake County 200 Petfinder Ln., Raleigh, NC 27603. Services provided by Brown-Wynne Funeral Home, Saint Mary's St. Raleigh, NC.
See more See Less