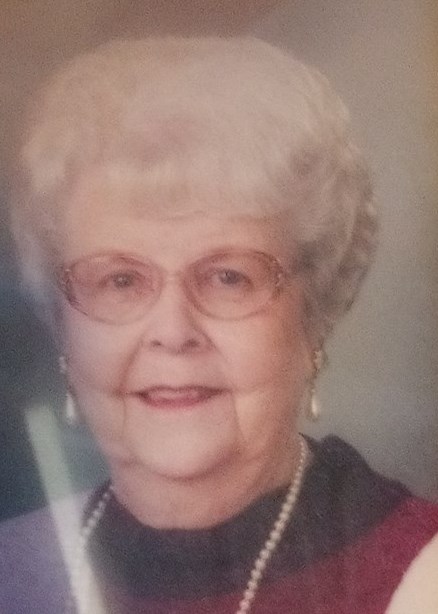 Meryl Bassett Baskett, age 96, of Richmond, VA, passed away May 10, 2022. She was predeceased by her husband, Robert Elmo “Pete” Baskett and their son, Colonel Robert Harold Baskett, Retired, both of whom had been pilot instructors in the United States Air Force. Surviving are daughters Suzanne Baskett Anderton and Laurie Lynn Baskett of Richmond. Meryl “leaves many hugs to her very special daughters whose care spurred her on to enjoy many more years. Other survivors include daughter-in-law Jacqueline Prestjohn Baskett, granddaughter Kirsten B. Ekstrom (Brandon), grandson Matthew C. Baskett (Mandy), four great granddaughters, two great grandsons and three nephews. Meryl would like to thank her friends and neighbors who have blessed her life in so many ways, visited her frequently and watched out for her in their own special ways. They are Timothy Barrett, his wife Maggie and daughter Emma, who adopted Meryl as surrogate grandmom, and Richard and Debbie Ward and their children John and Leah. These two families shared their time, love and special events with Meryl, even throwing her birthday parties. Scott and Joanne Armistead and their three sons shared their musical talents and love with Meryl which she so enjoyed. Former neighbors Betty Holton and Pat Thompson (both deceased) and Pat’s sister Judith Sutherland also shared special time and friendship with Meryl. Meryl also wishes to thank Pete’s cousin Winkie and husband Ron Messersmith for visiting often from Aylett, VA and Carol and Pete Tumbarello from Ashland, VA. David Shumaker, Handy Man, assisted Meryl in so many ways, enabling her to maintain continued home residence. Barry O’Neill and son Hunter and daughter Harvell also participated in maintaining Meryl’s residence along with Tim Barrett. Meryl also wanted to remember the folks at Totally You Hair Salon and O’Charley’s formerly on Forest Hill Avenue. Meryl and Pete grew up in Fairmount Baptist Church where both sang in the choir. They married on Christmas Eve 1943 at the Maxwell Field base chapel in Montgomery, AL. They returned to Richmond and raised three children in River Road Church, Baptist. Meryl has fond recollections of time spent with Reverend Chester Phelps who visited her through the years. Along with her brother Bill, his wife Jean and Meryl’s aunt by marriage, Marie Baskett Glenn, Meryl joined the Young at Heart Club of Fairmount Memorial Baptist Church and they had a lot of fun together on group travels. Meryl was much loved and will be greatly missed by her family, friends, and neighbors. A visitation will be held on Friday, May 20th from 6 PM to 8 PM at Woody Funeral home, 1771 N. Parham Rd. Richmond, VA. A funeral service will be the following day, Saturday, May 21st at 11 AM at Woody Funeral Home. Interment will be private. Fond memories and expressions of sympathy may be shared at www.woodyfuneralhomeparham.com for the Baskett family.
See more See Less

In Memory Of A. Meryl Baskett