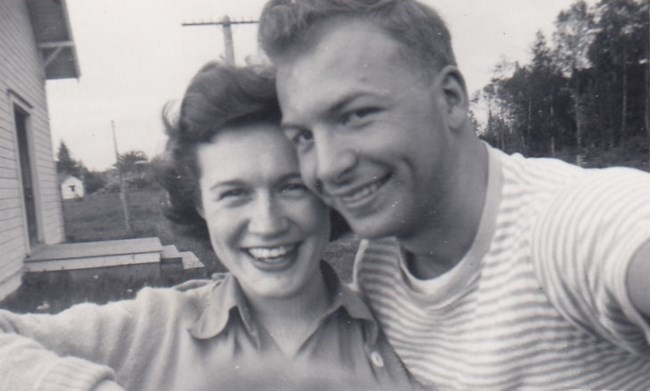 Ruth Anne Ruhl Harshberger was born on September 13, 1925, in Vinton, Iowa. She was the second daughter of Marie Antoinette Gross Ruhl and Levi Whitfield Ruhl, and younger sister to Adah Marie Ruhl. Her father was then Sheriff of Benton County and the family lived in the building that housed the jail. During the next ten years her family moved often, as her parents worked in a variety of jobs, sharing space with relatives during the hard times of the Great Depression. Most significant in “Ruthie’s” life was the brief 1933 stay in Roseburg, Oregon (where her father managed a Civilian Conservation Corps camp), because Ruthie began dancing lessons. In 1936, after more short-term stays in Iowa and Wisconsin, the family returned to Roseburg where Ruthie graduated from high school in 1943. She was active at school, serving as student newspaper editor and class officer; joined Job’s Daughters, serving as Honored Queen; and, most importantly, continued what became a lifelong passion for dance lessons and performances. After working for a year at the telephone company in Roseburg, Ruthie attended Stephens College in Missouri for one year and then transferred to the University of Washington in Seattle, where her parents had moved while her father served in the Army. She was active in the University’s dance program while pursuing her education. As a member of Sigma Kappa sorority she attended a fraternity/sorority mixer and met Charles Harshberger. They became engaged to be married in July 1948 and were wed in August 1949 in Roseburg, Oregon, after her June graduation from college with a Bachelor of Arts in General Studies. Their marriage was by far the most important part of her life - steadfast partners, lovers, and sympatico companions to each other all the rest of their lives. They had three children together. Ruthie rejoined the workforce in the 1960’s when the family moved to Edmonds, Washington, and her children were all busy at school. She was employed as a secretary in a variety of offices in the educational field, as office assistant to her husband when he started his own business, and earned real estate commissions on sales of Ocean Shores, Washington, properties. These professional pursuits were selected for their compatibility with the schedules of her husband and children so home life, vacations, and travel would be enhanced rather than diminished. She retired in 1987 to be able to travel with Chuck and spend more time with her children and grandchildren. Throughout her life the connections with her parents, sister, nieces and nephew, cousins, aunts, and uncles were important and kept current with frequent visits, letters, and phone calls. The same was true of friends she made along the way, many becoming lifelong relationships. She was outgoing, cheerful, friendly, organized, intelligent, and inclusive, with a true zest for life and ready laugh that lifted her husband’s spirits and made their life joyful. Her interests included dance, family history, travel, social gatherings, and, like her husband, turning events into celebrations. Ruthie’s great memory and the wonderful quality of her life were destroyed by Alzheimer’s Disease, which took her life on January 6, 2022. She had spent the final two years of her life in a memory care facility after Chuck was no longer able to care for her. She is survived by her three children, Lynn Harshberger Hicks, Susan Harshberger Free, and Lee Harshberger; five grandchildren; and four great-grandchildren. Her true mate and husband, Chuck, died just five days before she died.
See more See Less

In Memory Of Charles and Ruth Anne Harshberger