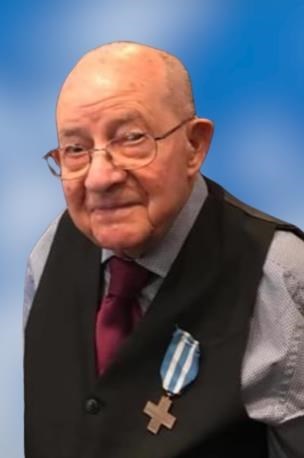 Peacefully at home with his beloved wife Angela (Pecchia) of 79 years by his side, God called Antonio Caporiccio on August 2, 2022 at the golden age of 103. Tony was born in Campodimele, Latina, Italy in 1919 to Concetta (Pecchia) & Angelo, and later married Angela in 1943. After serving in World War II in Italy, he immigrated to Toronto in 1951 where he made a permanent home for his family. Working in the kitchen at Toronto General Hospital is where he first fell in love with a variety of foods, in particular his love for roast beef, mashed potatoes, and gravy. Tony will be greatly missed by his loving children Renato (Gilda), Mario (Carla) & Frank (Elisa) and his brother Amodeo (Grace). Proud Nonno to Lisa (Frank), Alanna (Michael), Sarah (Danny), Marc, & Holly (Mike). Adoring great-grandfather to Sienna, Malia & Olivia. Joyfully reunited with his pre-deceased brothers and sisters Francesco, Attilio, Elena & Maria. He will be held dear in the hearts of his family and many friends. In memory of Antonio, memorial donations may be made to a charity of your choice. Fond memories and expressions of sympathy may be shared at www.delmorofuneralhome.com for the CAPORICCIO family.
See more See Less

In Memory Of Antonio CAPORICCIO