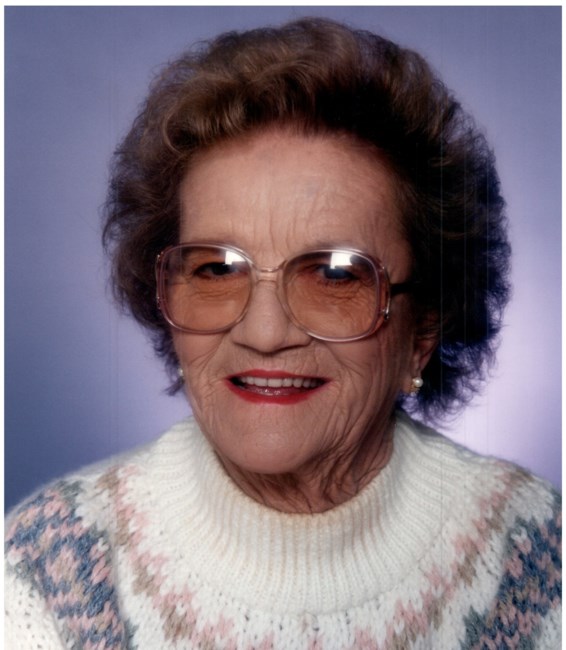 Ila Jean Fry passed away peacefully on her 94th birthday, January 17, 2020 in Visalia, California. She was born on January 17, 1926 in Sapulpa, Oklahoma. She was the youngest of 5 children born to Senith Susanna (Stockton) and Joseph Smith. Shortly before her birth, her father passed away and her mother later married Jim Watkins and they had two more children along with his three from a previous marriage. They had a blended family of 10 children, and all but the two oldest daughters, made their way to California during the great depression. They eventually made it to the Woodlake area where Ila Jean met Leo Fry. They were married on June 24, 1943 and spent the next 64 years together, until Leo’s passing in 2007. Leo and Jean raised 4 daughters and 2 sons together. Jean worked at FJ White in Woodlake for over 25 years as the famous “Lunch Lady. She was honored with a lifetime achievement award from the Woodlake Kiwanis Club in 2016. This turned out to be an entire community coming together with the Woodlake Lions Club providing transportation and showering her with a huge bouquet of white roses. She was treated like a queen and talked about it for weeks. Although, a prestigious honor, Jean is most notably remembered for the legacy of love and unfailing loyalty she had for kids, grandkids and great grandkids. She loved her family time and when loved ones would stop by for a visit. Jean will always be remembered for her spunky, spit-fire, tough as nails, and amazing personality. Jean enjoyed spending time with her grandkids and great grandkids. She often could be found playing in the dirt alongside the grandkids, singing songs and just enjoying being with them. She always made sure there was plenty of food, and always insisted on making you a little samich and a Pepsi to take home. Ila Jean is preceded in death by her husband Leo Edward Fry, Son Steve Fry, Grandson Christopher Souza and Son-in-Law Rod Hartman. She is survived by her children Sharon (Lloyd) Claytor of Shingletown, CA., Sheila Hartman of Exeter, CA., Scharlotte (Richard) Souza of Exeter, CA., Janet (Curtis) McCoy of Tulare, CA. and Chuck (Lesley) Fry of Lemon Cove, CA and daughter-in-law Shauna Blaszak of Kingsburg, CA. She also has 11 grandchildren and 14 great grandchildren with one more on the way! Celebration of Life services will be held on Saturday, February 15, 2020 at 12 Noon at Miller Memorial Chapel, 134 Cypress Avenue in Woodlake, CA. Tributes and condolences may be made at www.millermemorialchapel.com. Arrangements entrusted to Miller Memorial Chapel, 11120 W. Goshen Avenue, Visalia, CA (559) 732-8371.
See more See Less

In Memory Of Ila Jean Fry