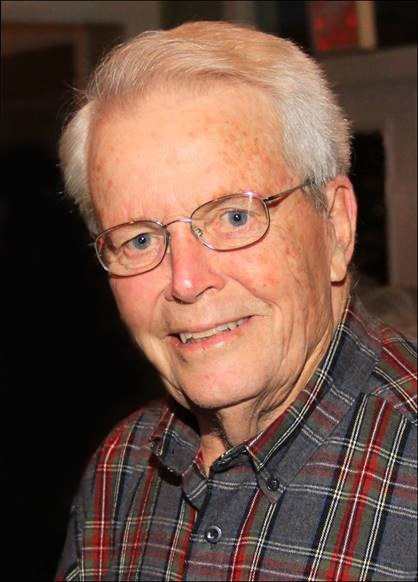 Gardiner A. Hall, 89 passed away on 7/27/22 at The Heron House in Cumberland Foreside. Born in Portland, ME in 1932, he was the son of Allan W Hall and Ruth M Hall. Gardiner lived most of his life in Yarmouth, ME graduating from North Yarmouth Academy in 1951, serving in the U.S. Army and graduating from University of Maine 1957. He married Mary Blaisdell in 1957. After a couple of years in Wisconsin, Gardiner and Mary returned to Yarmouth in the early 1960’s to raise their family where they had many friends around town getting together often for cook outs, parties, and boating around Casco Bay, always with their kids in tow. Gardiner was an agent for State Farm Insurance and later joined the insurance firm of Turner Barker as an account executive. For many years Gardiner and Mary owned and operated several Hallmark stores in downtown Portland, the Carriage House, Fessenden’s and later Gardiner’s Card and Gift Shop on Congress Street. Gardiner was community minded, as a member of the Yarmouth JC’s, the Yarmouth Lion’s Club and for several years was the coordinator of the Yarmouth Clam Festival parade as the parade grew to what it is today. He enjoyed downhill skiing, golfing, and bowling with family and friends. True to his name he was an avid “gardener” spending many summer hours tending to his veggies and flowers. Gardiner’s wife Mary passed away in 2004, and he was fortunate enough to meet and marry Joan F. Russell. They enjoyed 18 wonderful years together. Gardiner is predeceased by both of his parents, his wife Mary Blaisdell Hall, brother William Hall and sister Elizabeth Miller. He leaves behind his wife Joan Russell of Yarmouth and two sons, John A Hall and his wife Elizabeth of Springboro, OH. Reginald A Hall and his wife Heidi of Yarmouth. 4 grandchildren, AJ Hall of Indiana, Virginia Hall of Ohio, Stefanie Lister of Gorham, Tyler Hall of Portland and 3 great grandchildren and several nieces and nephews. He also leaves three stepsons, Brian Russell of Falmouth, Jeff Russell of Colorado and Tim Russell of Gray along with their wives, children and grandchildren. A hospice nurse recently asked Gardiner about his life, he replied “I’ve had a great life and it was an easy one.” Joan and family wish to extend a huge thank you to everyone at The Heron House for providing wonderful care and comfort and making him feel at home in his final days. The family invites you to a time of visitation on Wednesday August 3rd from 4:00 to 6:00pm at Lindquist Funeral Home, One Mayberry Lane, Yarmouth ME 04096. Committal at Riverside Cemetery will be private. You may offer your condolences or share your memories at www.lindquistfuneralhome.com At Gardiner’s request please consider a donation in the memory of Mary Blaisdell Hall to the Alzheimer’s Association Maine Chapter 383 US Route One, suite 2C, Scarborough, ME 04074
See more See Less

In Memory Of Gardiner Alva Hall