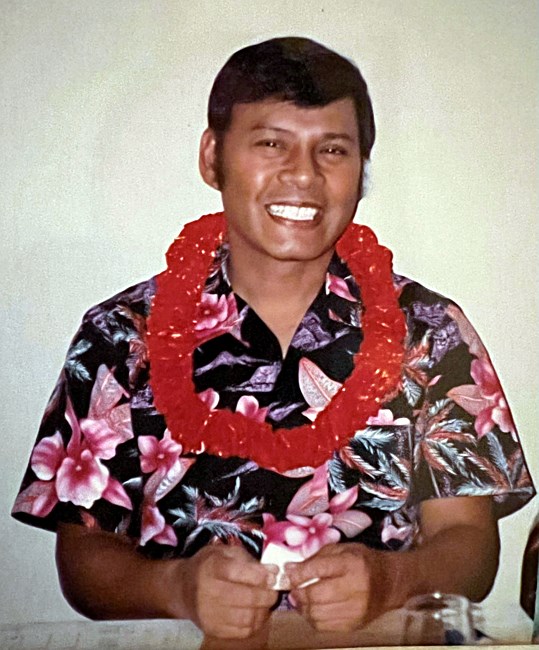 Antonio “Tony” Sabino Bautista passed away at age 84 in Arlington, Virginia surrounded by family after a brief battle with pancreatic cancer. Born March 14, 1938, in Banalo, Bacoor, Cavite, Philippines, he enlisted in the U.S. Navy in 1961. He served our country for over 23 years. After retiring from the Navy as a Mess Management Specialist (Culinary Specialist), he continued to serve in a civilian capacity at the House of Representatives and finally at the military base in Cheltenham, Maryland. Tony was proud to be a veteran, a Mason, and a talented chef. His joy, kindness, and his love for those around him were evident in all areas of life. Known as “Uncle Roast Beef” to many, he enjoyed cooking for large crowds and was often found at the carving station with his own commercial-grade heat lamp, serving up slices of his famous roast au jus. A Hallmark movie fan, thrift store connoisseur, and collector of hats, he was rarely seen without one; most recently his Vietnam Veteran cap. A truly generous soul, Tony helped his family members back in the Philippines and donated many instruments to his hometown’s marching band. He never hesitated to help a friend in need. He proudly celebrated the accomplishments of others and would attend graduation ceremonies equipped with a fog horn to use when his loved one’s name was announced. Simple things brought him joy— a Big Mac, fishing, or just people watching. Great with faces but not with names, he would often give nicknames based on personality traits. Tony was never late to anything. A true military man, he would arrive at the airport at least six hours before takeoff; promptly leaving the house at the appointed departure time regardless of who was in the car. Tony is survived by Mercedes, his wife of 51 years; daughters Emilia (David) King, of Greenbelt, MD; Minerva (Ron) Elizaga, of Delaware, OH; grandchildren Ella and Hannah King and Roman and Rosalyn Elizaga; his brother Candido (Alodia) and sister Rebecca, of Carson, CA; and a host of cousins, nieces, nephews, and dear friends. Visitation on September 30th at 2pm and 6pm (Masonic Funeral at 7pm) at Murphy Funeral Home, 4510 Wilson Blvd., Arlington, VA. Memorial service on Saturday, October 1st at 3pm at Church of the Epiphany, 1317 G. St. NW, Washington DC. Those attending the memorial service are encouraged to consider carpooling or using public transportation as parking is limited. Burial plans will be announced at a later time.
See more See Less

In Memory of Antonio Sabino Bautista