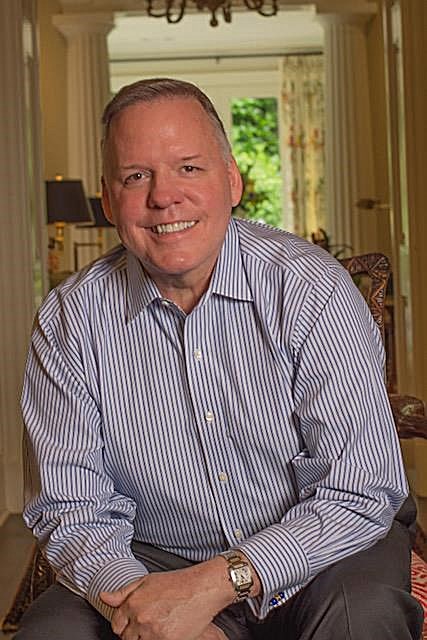 John Sessions Banks died June 27, 2021 after a short but perilous bout with cancer. He was 64. He was born July 6, 1956 to Mr. and Mrs. James Oliver Banks of Eutaw, Alabama. He attended Warrior Academy, Lyman Ward Military Academy, graduated from the University of Mississippi, and earned a post-graduate degree in Interior Design from the Art Institute of Atlanta. John was an accomplished interior designer, founding his eponymous design firm in 1987. His experience designing the interiors of some of Atlanta’s most prestigious homes was showcased in such leading publications and media as Atlanta Homes & Lifestyles Magazine, Seasons Magazine, Discovery Channel’s House Smart, and multiple rooms in Atlanta Symphony’s Decorator Showhouses. In 2020 he was named Honorary Design Chair of St. Philip’s Cathedral Antique Show and Tour of Homes. He was also an involved patron of numerous philanthropic organizations which included the Atlanta Humane Society and Hospice of West Alabama. He is preceded in death by his birth mother, Sue Sessions Banks, father, James Oliver Banks, stepmother Ann Hanahan Banks, and brother, James Oliver Banks Jr. He is survived by his nephews, James Oliver Banks III and Andrew Harrison Banks (Leah), great-niece, Margaret Gray Sessions Banks, sister-in-law, Connie Robinson Banks, aunt, Sarah “Sister” Banks Dodd, numerous cousins with whom he shared great adoration, and a legion of friends, all of whom miss him dearly. He also leaves behind his beloved Goldendoodle, Rudy, who has been adopted by his closest Poodle friend, Ross. A Liturgy for Burial will be held on July 19 at 10:00am at The Cathedral of St. Philip, 2744 Peachtree Rd. NW, Atlanta, GA 30305, with The Reverend Canon Lauren R. Holder, Officiant. A reception will follow in Child Hall. True to form, John selected the florist. There will be a private committal at the family’s cemetery at Grassdale, in Greene County, Alabama. In lieu of flowers or other expressions of condolence, please consider a donation to the Humane Society of Atlanta, Hospice of West Alabama, or St. Stephen’s Episcopal Church, Eutaw, Alabama.
See more See Less

In Memory of John Sessions Banks

A Liturgy for Burial