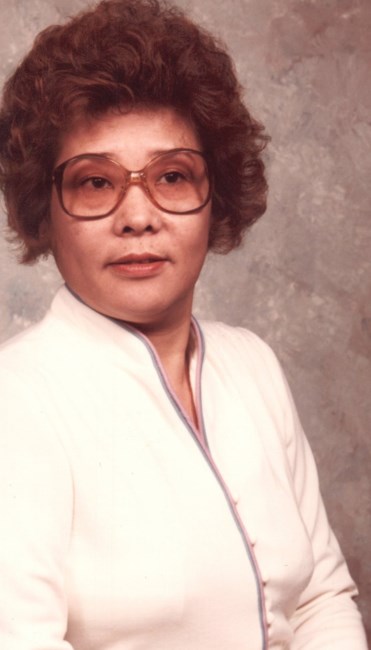 We are here to celebrate the life of Masayo Henderson, who entered into rest Sept 15, 2022 at her home at 85 years old. Born in 1937, she grew up on the northern end of the island of Japan, outside of Yamagata. When she would reminisce about growing up, she would speak about conversations she had with her dad as the bomber planes flew over head during WW2. She spoke of the garden her dad would grow, how beautiful the countryside was and the different types of trees that grew. When Masayo was 17 yrs old, she met an American Soldier named Ed Henderson, serving as a Military Policeman stationed overseas. Masayo married him at the American Embassy on Oct 12, 1954 in Tokyo Japan. Together, they spent many years traveling around Europe and the United States, moving from one duty station to the next. Masayo happily accompanied her husband to many get togethers, vacations and parties- always being an impeccable socialite. As a homemaker, throughout the years she made her own classy and stylish clothes and even a full suit for her husband. Masayo poured her heart and soul into being perfect in the kitchen, always finding and mastering new recipes in all the books and magazines she could get her hands on, many of these recipes are still in her kitchen today! She baked the best deserts and cookies that she shared with her neighbors and friends, bringing them to Christmas parties and get togethers. She loved to converse about the different ways to prepare all the different dishes from all parts of the world. When her husband retired from the Army, he did so from Ft. Gordon, Ga., where they had bought a house in Hephzibah and lived for the past 40 plus years. When Masayo spoke of her life here in Ga, she often spoke of her German Shepherd puppy whom she named King. Masayo reminisced often about how wonderful a dog he was and how much it broke her heart when he passed. She spoke of the friends she had made with her neighbors and the different places her and her husband would go for holidays. During her later years, especially after her husband passed, Masayo continued to enjoy baking cookies for her neighbors and friends. She would often sit out back on her patio and take joy in watching the dynamics between the different species of birds as they ate from her bird feeder that she placed outside her back patio windows. She talked to the squirrels, whom she nick named “Little Men”, as they would come and clean up the mess the birds had left. She enjoyed keeping her yard up, mowing the grass, keeping things neat and tidy. She often laughed when she talked about how, from one year to the next, Ed would get so frustrated when he would cut the grass and the Bahiagrass heads would just lay down when the mower went over and pop back up after he passed. Masayo nostalgically spoke of her mother, father and her sister, Yasuyo Aida. She told stories about the times she spent going back to Japan to visit and how long the flight was. She spoke of her favorite place to have lived- Germany and how clean everything always was, the food there and the people she met and friends she made. She would speak fondly of her time spent with her husband’s mother and what a proud strong woman she was. She shared stories and laughter about her brother and sisters in law and the time she spent with them, after marrying Ed. The pictures you see, Masayo spend many hours reminiscing over, telling stories about. Her gently kind soul will be missed by those she left behind and whose life she graced in her unique ways.
See more See Less

In Memory of Masayo Henderson