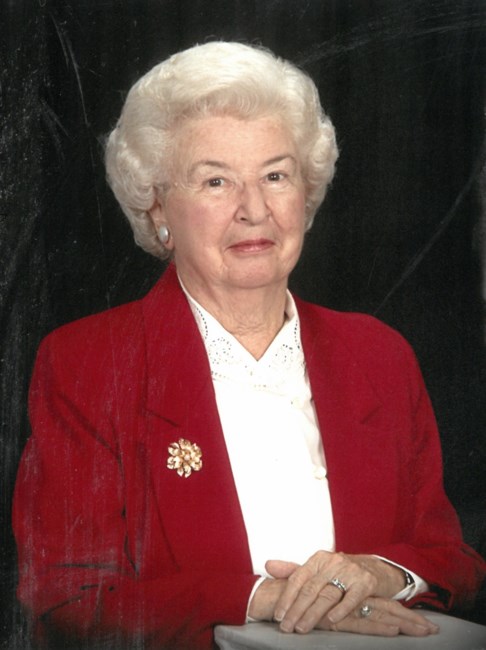 Austin, Tx - Gene Harkrider Bradford passed away peacefully in her home on August 17th. She was born on March 1st, 1923, in Marshall, Texas. Her parents were Winwood Waite “Mike” Harkrider and Ruth Whaley Harkrider, and her sister was Minnette Harkrider Carter. She grew up attending the First United Methodist Church of Marshall and was a lifelong Methodist. Gene graduated from Marshall High School in 1941 and attended Southern Methodist University. In 1946 she married her high school sweetheart James "Buddy" Bradford after he returned from fighting in the Pacific Theater of World War II. They then began a 25-year career in the U.S. Air Force which included moving to new bases every three or four years. Among their assignments was Little Rissington, England, where Gene attended the coronation parade of Elizabeth II and helped represent the United States Air Force before members of the Royal Air Force. Their other assignments included Seoul, Korea, Laredo, Texas, where Gene served as president of the Laredo Air Force Base Officers’ Wives Club, and Washington, D.C. Travelling worldwide, Gene was passionate about learning the culture at each place where they lived, and she shared the traditions that she learned with her sons. Gene loved her hometown of Marshall, Texas, and no matter where they lived her home exemplified East Texas hospitality. After their Air Force career Gene and Buddy retired in Austin, and their home was always the gathering place for holidays and family celebrations. Gene served as a volunteer at Seton Hospital in Austin for many years. She loved playing golf with her sons, Texas wildflowers, and East Texas pine trees, planting a pine tree in her yard in Austin. Gene was thrilled when grandchildren began arriving and loved keeping up with their activities. Gene treasured their annual family summer vacation to Port Aransas where the expanded family and in-laws would gather to renew and strengthen family ties. Gene is survived by her four sons, Bill, Stuart, Eugene, and Robin, and daughters-in-law Ellen, Debbie, Melissa, and Cheryl; her eight grandchildren, Lauren Faske (Ben), Brooke Bradford (Stephanie), Sam Bradford (Nan), Trey Bradford (Emily), Jackson Bradford (Christina), Michael Bradford (Leeza), James McClain Bradford, and Sophie Bradford; eight great-grandchildren, Forest, Luke and Maverick Faske, Alissa, Richard, and Makayla Bradford, and Le'Derion and Aidan Bradford, as well as brother-in-law Fred Bradford (Penny) and wife of brother-in law Don Bradford (Katherine). When Buddy passed away in 2017 after 71 years of marriage, Gene continued to live in their Austin home, hosting holiday meals and birthday parties with the same East Texas hospitality and love that she had established and nurtured all her years as wife, mother, and grandmother. She will be greatly missed. The family would like to thank Gene’s caregivers from Visiting Angels. A funeral service for Gene will be held Saturday, August 27, 2022 at 10:00 AM at Cook-Walden Funeral Home, 6100 North Lamar Boulevard, Austin, Texas 78752. A graveside service will follow at 11:30 AM at Austin Memorial Park, 2800 Hancock Drive, Austin, Texas 78731. In lieu of flowers, contributions can be made to the Seton Foundations, 1345 Philomena Street, Suite 400, Austin, Texas 78723. Please indicate on your check, "In memory of Gene Bradford". Fond memories and expressions of sympathy may be shared at www.cookwaldenfuneralhome.com for the Bradford family.
See more See Less

In Memory of Gene (Harkrider) Bradford