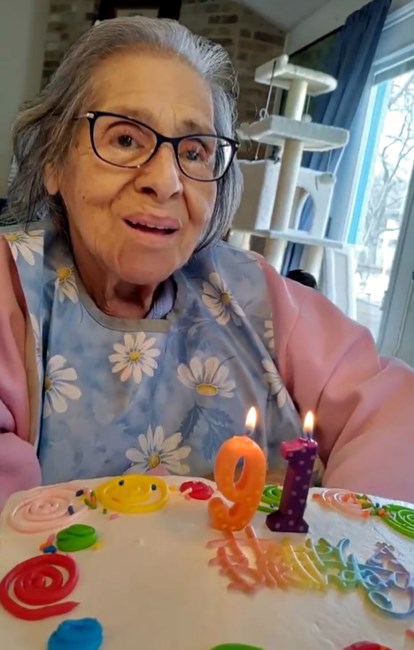 Emelia Marcelina (Martha) Quintanilla (neè Rivera), 91, of Austin, Texas passed away September 23, 2022 at her home. She was born on March 16, 1931 to Vicente Rivera and Refugia (Ruth) Lopez Rivera. Supporting her husband, Josue Vargas Quintanilla, following his graduation from the University of Texas, they moved to Corpus Christi, Texas where they raised seven children, including a set of twins. Martha assisted in accepting the bodies of fallen soldiers from the Vietnam War at the local airfield and helped the soldiers’ families with funeral services. She was also heavily involved in the Parent-Teacher Association of Prescott School, the elementary school her seven children attended. Every year she would make sandwiches for each of her children’s class Christmas parties. Further serving her community, Martha served as a volunteer poll worker for many elections. Martha enjoyed crocheting, sewing, and was an avid University of Texas baseball fan. She is survived by her seven children; Roger (Mary), Teresa, Denise, Charles, Richard (Roxanna), Yvette, and David; nine grandchildren: Nancy, Jessica (Lucas), Hannah (Jeremy), Lucille-Virene, Shane (Xinran), Leila, Katherine-Lee (Chase), Claire (Jarrod), Eve (Aaron); two great granddaughters: Pele and Genevieve; and beloved pet Max Omar. Martha is preceded in death by her husband of over 62 years, Josue; her parents Vicente and Ruth; and siblings: Petra, Bicente, Benancio, Leon, Louis, and Mary Ruth. Martha’s family will honor her memory privately. In lieu of flowers, her family requests that memorial donations be made to Austin Pets Alive! Fond memories and expressions of sympathy may be shared at www.wcfishsouth.com for the Quintanilla family.
See more See Less

In Memory of Marcelina Rivera Quintanilla