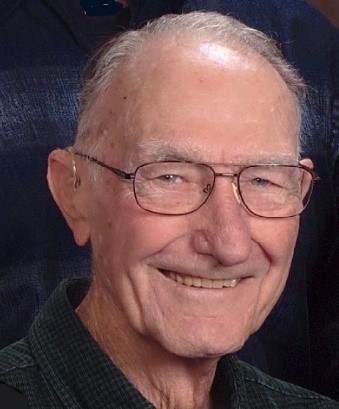 Ray Leigh Thompson died October 3, 2022. He was preceded in death by his wife Elaine Englund Thompson, and brother Scott Thompson. He is survived by his sister, Margaret Sekal of Alief, daughter Debbie Thompson and husband Gardner Ayres of Georgetown, son Kent Thompson and wife Tracy of Round Rock, granddaughter Tori Thompson of Austin and lots of nieces, nephews and cousins. Ray was born in Allen County, Kansas on a farm between Iola and Moran. He graduated from Minneapolis High School in 1944. He attended Kansas State University from 1944 to 1950, with a one year off for Navy enlistment near the end of World War Two. He graduated with an electrical engineering degree. He joined IBM in 1950 first at Topeka Kansas, then transferred to Poughkeepsie, New York, then Lexington, Kentucky and finally Austin, Texas (there is a reason why some think IBM means I’ve Been Moved). He retired from IBM in 1992 with a total of 41.5 years of service. He met his wife Elaine while in Topeka and married her after moving to Poughkeepsie. In retirement Ray was an avid golfer and Save Muny supporter as well as a dedicated volunteer at Covenant Presbyterian Church running the “wrecking crew”, a maintenance group, for many years. Ray was a kind and loving person with a generous heart. Everyone thought the world of him. He would help people without hesitation and was a loyal friend (i.e. friends for life). He will be remembered as a nice man with an odd intelligent sense of humor. The funeral service will be held at Covenant Presbyterian Church, 3003 Northland Drive, on Friday, October 14th, at 2:30 pm followed by a reception. For those unable to attend, you may view the service via livestream at https://vimeo.com/event/639467. In lieu of flowers, contributions in Ray’s memory may be directed to: Save Muny Historic District https://www.savehistoricmunydistrict.org or the American Cancer Society https://donate3.cancer.org
See more See Less

In Memory of Ray Leigh Thompson