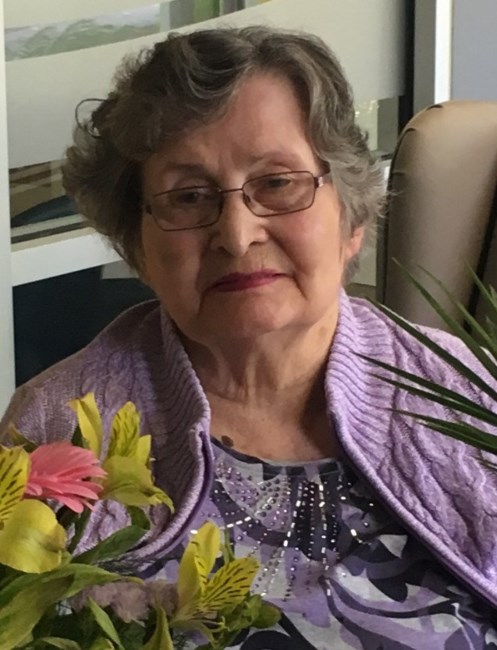 We are truly saddened to announce that Anne Hamilton (nee Wasylchuk) of Barrhead, Alberta, peacefully passed away on Thursday, 12 May 2022. She is survived by her sister, Nancy Storey; brother Mike Wasylchuk (Sandra); daughters, Corinne McMillan (Chuck), Lorna Schafer (Allan) and son, Warren Hamilton (Lynn); granddaughters, Katelyn, Simone and Clara Hamilton and grandsons, Johnathan and Andrew McMillan; along with nieces, nephews, extended family and friends. Anne was predeceased by her mother and father, Marija Wasylchuk (nee Dolynna) and Dmitro Wasylchuk; her husband Robert (Bob) Stanley Hamilton and her son, David James Hamilton; sisters-in-laws Esther Megley and Florence Edwards; brothers-in-law Walter Megley, Denis Edwards and Robert (Bob) Storey. Anne was born and raised near High Prairie, Alberta. She spent her childhood and formative years on a farm during the Great Depression and World War II. Anne attended high school in High Prairie and upon leaving school, she went to work at the Toronto Dominion Bank in McLennan, Alberta. It was here that she met her true love, Robert (Bob), whom she would marry in July of 1951. At that time, Bob was working in McLennan for the Northern Alberta Railways (NAR). They would spend the next 10 years in McLennan raising their family. In the fall of 1961, Bob was accepted into the Faculty of Dentistry at the University of Alberta. Anne packed up the family and moved to the Southgate area of Edmonton. For the next four years, until Bob graduated, Anne held the family together on a meagre budget with her vast, creative abilities. With Bob graduating in the spring of 1965, the family moved to Barrhead where Anne would spend the rest of her life. Upon her arrival in Barrhead, Anne quickly began to develop friendships through her work with the Barrhead United Church community and through bowling with the Barrhead Bowling Club. One thing that life in Barrhead necessitated was a lot of driving especially into Edmonton. Anne was constantly driving her children for music lessons or sports activities. Barrhead also enabled Anne to enjoy the wonderful outdoors as one of her favourite activities was blueberry picking in the Boreal Forest north of Barrhead across the Athabasca River. Besides her love and devotion to her family, Anne had three passions that were lifelong endeavours: cooking / baking, sewing and gardening. Probably due to her Ukrainian heritage, Anne was an incredible cook and baker. Her culinary abilities were sometimes taken for granted by family, however, Anne never stopped surprising with new, wonderful recipes. Her signature dish was perogies with an onion cream sauce. Had she been born in a different era, to parents of a different socio-economic status, Anne might have been a fashion designer. In her early adulthood, Anne sewed all her own outfits and dresses. This continued with her expanding family as she would always have her children dressed in beautiful, home-sewn clothes. Every Halloween, Anne would sew creative costumes for her children and later grandchildren and her great-niece, that were even winners of the ‘Best Costume’ award. Anne’s true calling was her gardening, which she would spend hours after hours in the spring and summer of each year. Not only would Anne have a garden in her own backyard, but also at neighbours’ properties. Eventually, Anne felt she did not have enough garden space and cultivated a large garden lot near Thunder Lake. What truly differentiated Anne from other gardeners was she was a connoisseur of flowers and she seemed to know what flower was right for a specific space. Anne’s family would like to thank her many friends, who loved and supported her throughout her lifetime. A special thank-you goes out to the staff of the Dr. WR Keir Barrhead Continuing Care Centre. Memorial Donations in Anne’s memory maybe made directly to Salvation Army, Arthritis Canada or Charity of Choice. Funeral service will be held to celebrate Anne’s life at 1:00 PM on Friday, 27 May 2022, at the Rose Garden Chapel, 5326-48 Street, Barrhead, Alberta. Also, expressions of sympathy and condolences may be left at RoseGardenChapel.com
See more See Less

In Memory of Anne Hamilton