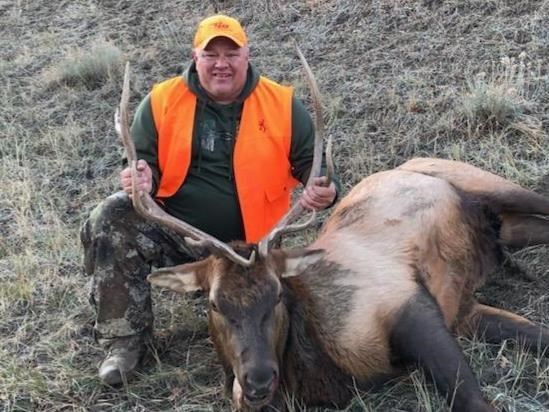 Terry James (Jimmy) Dyke, 47, of Mont Belvieu, passed away on May 17, 2021. He was born on February 1, 1974 to Terry and Mike Smith. He was married to Stephanie Renee Sawyer for 6 years. He worked for Rio Marine for 28 years. Terry’s biggest passions were spending time with his family, his job and hunting. Terry was an avid hunter, and fisherman. His crowning glory was the Elk he bagged this past winter. Terry was also a member of NRA, a Marine veteran, and an avid Trump supporter. Terry was a proud Marine veteran following in the footsteps of Grandpa Chuck, a Navy veteran, and Grandpa Dick, a Marine veteran. Terry’s son Gage is a USCG veteran, and his son Robert is currently serving in the USCG. Terry was so proud of his country and this military legacy. Terry is preceded in death by C.M. (Butch) Sawyer, the father of his wife, Stephanie Dyke. He is survived by his loving wife, Stephanie Sawyer Dyke; three sons, Gage Oliver and wife Lauren, Robert Murry, and Riley Dyke; father Michael C. Smith and mother, Terry Adams Smith; brother, Matthew Smith; sister, Jessica Smith; mother-in-law, Sandra Sawyer; father-in-law, Mike Anderson; Tracy and Mike Waites; Michael Sawyer; Crystal and Mark (Opie) Trammell; nieces and nephews, Spencer and Hanna Waites, Emily Waites, Meagan Waites, Aubrey Sawyer, Colt Sawyer, Tucker and Saylor Trammell; and numerous other relatives, friends and coworkers. The family will receive friends for visitation on Thursday, June 3, 2021 from 5:00-8:00 pm at Navarre Funeral Home, 2444 Rollingbrook Dr., Baytown, TX 77521. Funeral services will take place on Friday, June 4, 2021 at 2:00 PM in the Chapel of Navarre Funeral Home. Graveside service and committal will take place on Saturday, June 5, 2021 at 1:00 pm in Porter Springs Cemetery, Crockett, TX. Words of comfort and tributes may be shared with the family at www.navarrefuneralhome.com
See more See Less