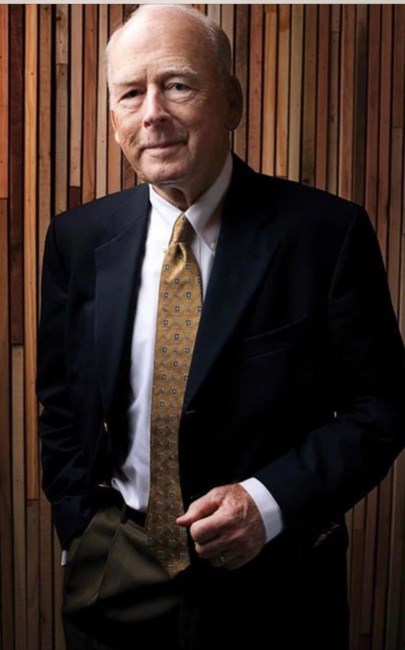 Albert Fox deFuniak III Oct.31 1940-Sept.16,2022 Albert Fox deFuniak, III went into the loving arms of Jesus on Friday, September 16, 2022. He died peacefully at home, surrounded by his loving family, with worship music filling the room. He was born on October 31, 1940 in Birmingham, Alabama to Frances and Albert Fox deFuniak II. His great grandfather was Fredrick deFuniak, for whom DeFuniak Springs, Florida was named. The deFuniak and Thompson families came together in marriage and were early pioneers in Birmingham. The family lived across from Linn Park, where the Birmingham City Hall is today and Mr. Thompson was the first person buried at Oakhill Cemetery overlooking the BJCC. Mr. deFuniak is survived by his wife of 49 years, Sara Lynn deFuniak and four daughters: Liz Landgren (Brett), Emily Gregory (Paul), Kate deFuniak, Sara Frances Walker (Chris). He is also survived by eight grandchildren: Bess Landgren, Fox Landgren, Banks Landgren, Mary Addison Gregory, Beau Grgory, Amelia Gregory, Christopher Walker, Charlie Walker, and baby boy Walker due in November. Mr. deFuniak attended Lakeview Elementary, Ramsay High School and the University of Alabama. He graduated in 1963 with a BS in Business Administration. He was a member of the Beta Delta Chapter of Alpha Tau Omega fraternity and maintained friendships with many of his fraternity brothers until his death. While at Alabama, he played on the Alabama golf team, coached by Gene Stallings. Mr. deFuniak had a significant amateur career in golf. As a junior golfer, he was the Jefferson County Junior Champion, qualified for the National Jaycee Junior Tournament representing the state of Alabama and finished 11th in the country the year Jack Nicklaus won. He was the first club champion at Green Valley Country Club and finished high in a number of local tournaments. He was a member of the Mathews Marauders dogfight at the Mountain Brook Club and also a member of the Chislers and Sting dogfights at The Birmingham Country Club. The game of golf was a major part of his life. Mr. deFuniak had a long successful career in banking that spanned 52 years. His career started in 1963, at an entry level position at the First National Bank of Birmingham, which became AmSouth Bank. When he retired in 1995, he was the President of the Birmingham Bank, Senior Executive Vice President and a member of the Senior Policy Committee, the top 6 executive officers of the company. He then joined Sterne, Agee & Leach as a Managing Partner and CEO of the Trust Company of Sternee Agee and the CEO of Sterne Agee Asset Management. In 2015, he retired from Cadence Bank as Birmingham Market Chairman. Over the span of many years, Mr. deFuniak was very active in Birmingham community charitable and developmental activities, including: Chairman of Operation New Birmingham, Chairman of the Metropolitan Development board, Trustee of the BBA, Treasurer of Blue Cross, member of Class II of Leadership Alabama, President of Parent Partnership, board member of amp Smile-a-Mile, UAB Research Foundation, President of the Birmingham Kiwanis Club, President of the Festival of Arts, President of the Birmingham Jaycees, President of the Birmingham Bachelors Club, Birmingham Chairman of the CAP Board, Chairman of Lifetime Achievement Award and also the state of Alabama as "Economic Developer of the Year". He was also involved in many fundraising positions, such as Alabama Symphony, American Cancer Society, American Heart Association, Muscular Dystrophy Association, and United Way. Mr. deFuniak was active at Canterbury United Methodist Church. He was a member of the Crawford Owen Sunday School Class and served as its President. He was also a member of the Thursday morning Bible study and immensely enjoyed the fellowship. Mr. deFuniak loved Birmingham and worked diligently to make it better. He loved his family and was proud of the lives that they live and the values that they instill in their children. He also loved his friends and was thankful for their love and support throughout his life. On Tuesday, September 20, 2022, at Canterbury United Methodist Church, the family welcomes all who loved Fox to a visitation beginning at 1:00 pm, followed by a Celebration of Life service beginning at 2:30 pm. In lieu of flowers, the family requests memorials can be made to The Foundation to Eradicate Duchenne, in honor of Mr. deFuniak's grandson, Beau Gregory. Foundation to Eradicate Duchenne, PO Box 2371, Alexandria, VA 22301; 703-683-7500; Fond memories and expressions of sympathy may be shared at www.johnsridouts.com for the defuniak family.
See more See Less