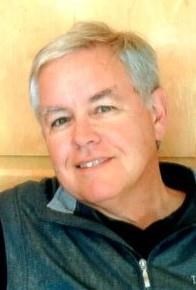 Jeffrey Lynn Cook, 70, died suddenly on Saturday, September 24, 2022 while visiting Boone, NC with his family. A native of Mt Airy, NC, Jeff was born on September 7, 1952 to the late Claude and Mary Ruth Cook. In addition to his parents, he is preceded in death by his older brother, Olan Johnson Cook. After graduating from Mt Airy High School, Jeff served in the US Army for two years, was stationed in Kaiserslautern, Germany, and given the opportunity to visit twelve European countries. Jeff earned a Bachelor of Science in Business Administration from Appalachian State University in 1976. He began his career in the paint business, working at Glidden and Duron Paint Stores, before joining as a partner with Penn Davis Coatings, Inc. Jeff formed lasting friendships with college friends, golfing buddies, business colleagues, and customers. Jeff was a longtime member of First United Methodist Church and Unity Sunday School Class and he played on many church sports teams. Jeff was an avid golfer, a member of Bentwinds Country Club, and he enjoyed playing countless courses with his golf buddies, including the Old Course at St Andrews in Scotland. He was a season ticket holder for App State football games, a loyal fan, and a generous contributor. He served as a member and past president of the Yosef Advisory Board. He bowled in a league for many years and enjoyed spending time at his beach home. Jeff is survived by his wife, Carol Cook, of 46 years, his daughter, Joy Balderson and her husband, Richie, his son, Justin Cook, and his grandson, River Balderson. Funeral service will be held at 2:00 pm on Monday, October 24, 2022 at First United Methodist Church in Cary. Family will receive friends one hour prior to the service at the church. Inurnment will follow at Raleigh Memorial Park at a later date. In lieu of flowers, memorials may be made to First United Methodist Church, 117 S. Academy St, Cary, NC 27511. Arrangements by Brown Wynne Funeral Home, Maynard Rd, Cary, NC and tributes may be made at www.dignitymemorial.com. Fond memories and expressions of sympathy may be shared at www.BrownWynneCary.com for the Cook family.
See more See Less

In Memory of Jeffrey Lynn Cook