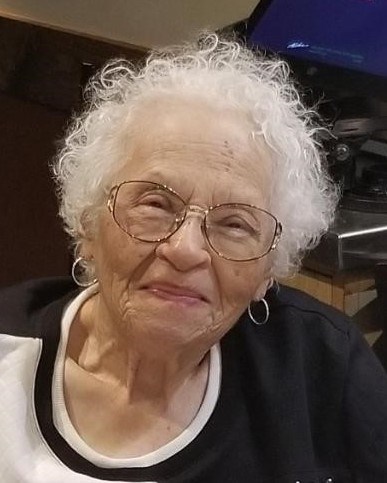 Alleze J. Westbrooks was born November 5, 1921 in Russellville, Alabama to George Murray Thompson and Hattie Ellen Thurston Thompson. Alleze, known as “Itty Bitty”, was the eldest of three siblings: Robert Murray Thompson, Palmer Thompson, and Gloria B. Thompson Adair. The family moved to Kansas City, Kansas where she attended the public school system. She completed elementary school, junior high school, and graduated from Sumner High School in 1939. She attended one year of Junior College in Kansas City Kansas. After her school days she was employed as a Rosie the Riveter at North American Aviation in Fairfax, Kansas. She also worked for the Internal Revenue Service in Kansas City, Missouri. Alleze was a member of St. Peter CME church in Kansas City, Kansas and participated in many of the church activities. In 1951 she married Wesley D. Westbrooks and they soon moved to Denver, Colorado. Alleze was employed by the Air Force Accounting and Finance Center and transferred to the Small Business Administration. She retired in 1979. Alleze and Wes enjoyed their retirement; they traveled around the world, to Spain, to Hawaii, and they took several Caribbean cruises. She was the doting mother of two daughters, Tura Mae and Joyce. She was an active member of Cleaves Memorial CME Church; she was a choir member and supported the youth of the church by providing transportation to the various activities. She was an active member of the National Association of Colored Women’s Club. She was a founding member of the George Washington Carver Daycare Center and a Board member for Warren Village, just to name a few. She was a great friend to many. Preceding her in death was her husband Wesley, daughters Tura Mae Westbooks Bell, Joyce Westbrooks, her beloved grand daughter Candace Bell, her three siblings, and her parents. Alleze Westbrooks leaves a legacy of service to God, family, church, friends and others. Her memory will live on through her nieces, Janielle Ferguson (Lawrence) of Blue Springs, Missouri, Yvette Williams of Overland Park, KS, Adoria Adair of Raytown, Missouri and Almeree Justice of Lees Summit, Missouri, nephew Eric Epps of Ft. Meyers, Florida, niece Cynthia (Chester) Maxwell and nephew Wallace Sutton along with a host of great nephews and nieces.
See more See Less

In Memory of Alleze J. Westbrooks