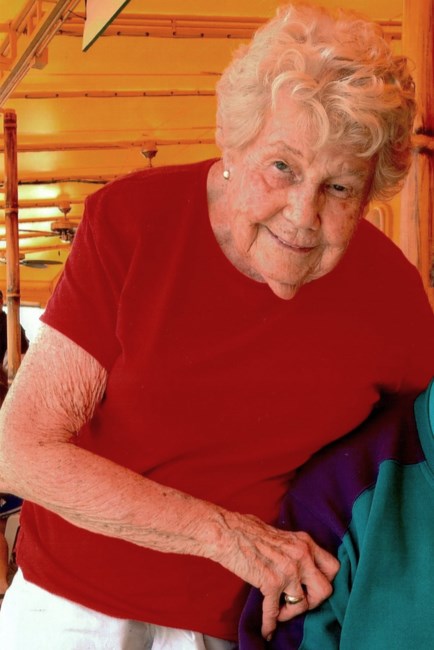 Phyllis B. Haskell, 96, of Largo, Florida and Harwich, MA passed away peacefully at her home in Harwich. She was the wife of the late Andrew J. Haskell and the daughter of George and Alice (Caughey) Thacker. Phyllis was born in New Bedford, MA and raised in Fairhaven, MA. During her high school years she worked at the local 5&10 cent store and also for her father at Thacker Industries. She and Andrew married in May of 1949. During this time she worked at United Motors in New Bedford then decided to move to the Cape in 1969. She then worked at Manson Motors (Chatham Ford), the Candy Manor and the Harwich COA until her retirement. Her favorite pastimes consisted of horseback riding, golf, casinos, travelling, playing a board game called HELL and cooking. She was constantly driving the horse trailer for the many parades. Casinos were fun for her as Andrew sat with other non-gambling folks. Her travels took them to Europe, the Caribbean and Alaska. She loved entertaining. It would be Happy Hour, Happy Appetizer Hour and then a wonderful meal. At Christmas time she made the best Plum Pudding. And then there was HELL, the board game! For each game she would make each player put 25 cents in the till. She usually heard the comment...but I need gas money!!! She will definitely be missed by those who knew her. She is survived by her son, Bruce (Barbara) of Yarmouthport, granddaughters Jil-ana Haskell of Texas, Sarah Egger (Christian) and the love of her life, Great Grandson Jaxson Drew Egger of Fort Lauderdale. She also leaves two nieces, Beverly Farris and Francescia Torres. She was predeceased by her sisters, Mae Torres and Gladys Almeida. Visitation will be held on Thursday, October 20th from 3-5PM at Nickerson Funeral Home on 87 Crowell Road in Chatham. Burial will be private. For online condolences, please visit www.nickersonfunerals.com.
See more See Less

In Memory of Phyllis B. Haskell