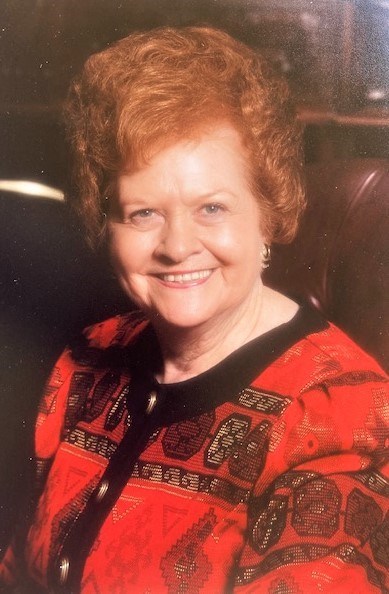 Raye Dell, age 90, a long-time resident of North Richland Hills, passed away peacefully on September 17, 2022, at the home of her daughter and son-in-law in Granbury. A funeral service to celebrate the life of Raye Dell Choate will be held Sunday, September 25, 2022, at 11:00 am at Bluebonnet Hills Memorial Park in the Bluebonnet Hall, 5725 Colleyville Blvd., Colleyville, Texas 76034. The family will receive friends one hour prior to the service at 10:00 am in the Bluebonnet Hall. Interment to follow at Bluebonnet Hills Memorial Park, Colleyville. Following interment, please return to the Bluebonnet Hall for a reception in Raye Dell’s honour. Family and friends can access service information from the website: bluebonnethills.com Raye Dell was the oldest child to Raymond and Ima Dell Carroll, born in Goodlett, Texas, June 4, 1932. She spent many days of childhood working in the cotton fields and often spoke of how glad she was to have grown up and not have to work those long hot days pulling cotton any longer. She met Donald Choate at Oak Street Baptist Church in Graham, Texas, where they married on October 7, 1950. Raye Dell and Donald were married just two months shy of 69 years, when he preceded her in death in 2019. Raye Dell and Donald moved to Fort Worth in 1950 where her skills in typing and taking dictation by shorthand allowed her to have a successful career throughout her adult life. Raye Dell worked as an executive secretary for Southwest Capital Life until the birth of her third child. Taking a few years away from the office to raise her three children, she later returned to her career as an executive secretary at Miller’s insurance group, working there until she retired in 1994. As a faithful Christian, she served many roles in the church including teaching Sunday school, volunteering on service committees, and serving as church clerk. Raye Dell loved to travel and would work each year on planning, saving, and preparing for a vacation. She often canned up food to carry on camping trips. Raye Dell and Donald were fortunate to enjoy some wonderful travels, including Australia, Switzerland, Austria, Germany, Alaska, Hawaii, Canada, and most of the continental U.S. states. Raye Dell is survived by her daughter Cynthia Hall and son-in-law Author of Tyler, Texas; daughter Vicki Cleveland and son-in-law Arthur of Granbury, Texas; son Donald Leslie Choate and daughter-in-law Laurie of Haltom City, Texas; granddaughter Lauren Choate of Mineral Wells, Texas; granddaughter Natalie Davis of Houston, Texas; grandson Josh Famigletti of Haltom City; sister Wanda Louise Caldwell of Boyd, Texas; two great grandsons: Layton Reeves and Walker Davis; two great granddaughters: Emma Reese James and Desi-Lu James; three step-grandchildren: Aaron Cleveland, Robert Cleveland, Marcy Femminella; four nephews, two nieces and many cousins and extended family.
See more See Less