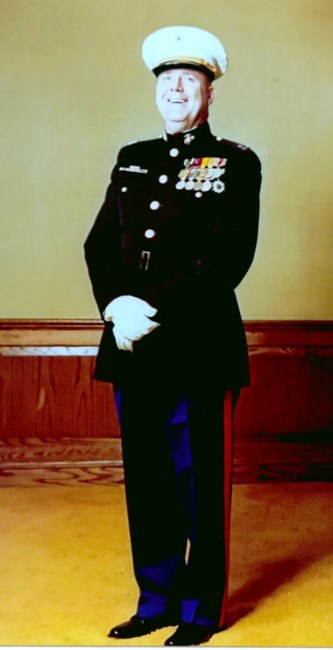 COLUMBIA - Wallace E. York Capt. USMC passed away peacefully on November 29, 2018. He was born December 18, 1925 in Readsboro, Vermont. Predeceased by his wife, Catherine M. Muller York and his daughter, Mary D. York. Survived by his sons, William E. York, Lt Col USAF (Ret) (Sandra) and John S. York (Connie); grandsons, Andrew N. York (Ashley), Major, USAF, Garrett W. York (Alyssia), Kristian J. Bell (Nicole), and Bryan York; great grandchildren, Harper R. York, Kristopher J. Bell, and Nigel M. Bell; nephews, Kerry Frazier (Debbie) and Alan Frazier. Wallace grew up in the hills of Vermont. On December 7, 1941 he and his father, Sewall A. York, went on enlist in the military. Wallace was not accepted because he was too young at the time. He subsequently joined the USMC in 1943. He excelled as a marksman and instructor. Wallace was assigned to the 6th Marine Division which formed in the Pacific and trained on Guadalcanal. Wallace earned many awards for Valor. He promoted through every enlisted rank E1-E9, Chief Warrant Officer, and then commissioned and retired as a Captain. He served in the infantry during WWII in the Pacific theater; Okinawa, Guadalcanal and China. If you haven’t read about Sugar Loaf Hill, it was literally hell on earth and he went right through the middle of it. In Okinawa, he was a part of “F” Co, 2nd Bn 29th Marines. 3512 Marines landed and 2821 fell…. Only 691 survived. He then served in Korea and Vietnam. Warrior, leader, and family, the USMC lost one of their ranks but gained a legend.
See more See Less

In Memory of Wallace Edward York