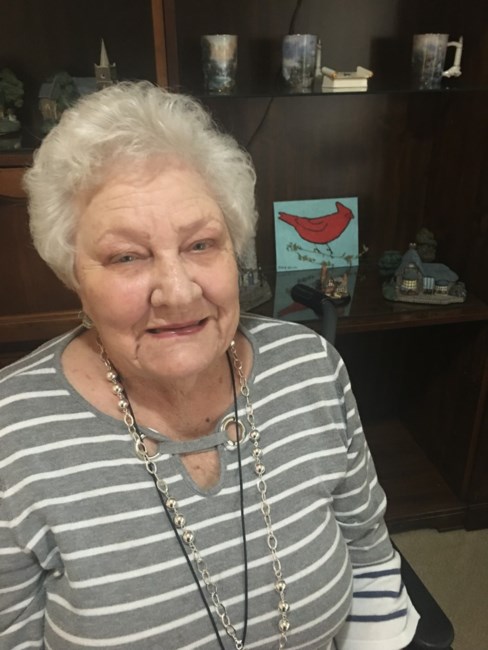 Mary Ann Paxson Kinion of Coppell, TX, died in the early hours of Saturday, November 20, 2021. Mary Ann was born June 30, 1926, in rural Baxter Springs, Kansas. Her two sisters Erma L. Paxson Hodson, and Alice Maxine Paxson Mussa survive her. She is also survived by daughters, Beverly A. Kinion Johnson (Terry), and Renee L. Kinion Hedges (Steve), grandchildren, Alayna L. Johnson Atteberry (Brett), Derek R. Johnson, and Zachary K. Kinion. Precious Great-granddaughters, Audra C., Brynna L., and Livia A. Atteberry also add to her legacy. She was preceded in death by her husband of 53 years, Clarence E. Kinion, who died in 1998. Her son, Gerald W. Kinion also preceded her in death. She was preceded in death by her parents Charles O. and Alice Hefley Paxson, brothers Maurice, Lloyd, Robert, Martin, Ivan, and Lester. Mary Ann met Clarence at Riverton High School, where they were King and Queen of the Yearbook in 1944. Upon Graduation Clarence reported to military duty and Mary Ann began a career as a bookkeeper. They were married January 20, 1945, when Clarence was on a leave from boot camp before being shipped overseas to serve in the US Army. Mary Ann and Clarence made their home in Baxter Springs, Kansas; Denver, Colorado; Carl Junction, Missouri; Rockville, Indiana, and Victoria, Texas. Mary Ann moved to be near Beverly to Euless, Texas, in 2007, then to Irving, Texas, in 2010, and to in Coppell in 2019. Mary Ann and Clarence were active in the United Methodist Church, Promenader’s Square Dancer Club, and DuPont Retirees. Mary Ann also kept busy with many activities in her retirement, Victoria Quilt Guild, Women’s Investment Group, and volunteering with her church, serving in many capacities. Mary Ann was active all her life. She was in band and orchestra in high school, played softball as a young adult. She mowed her own yard until she was 80! In these last years, Mary Ann enjoyed all the available activities at River Oaks Assisted Living. She loved life and her family, especially her great-granddaughters, who called her Gigi. She would light up any time they were able to come visit her. She always had a smile on her face, even though dementia eroded her mind, her spirit was always joyful. A celebration of Mary Ann’s life will be held at a later date with burial in Joplin, Missouri. In lieu of flowers, donations may be made in her memory to First United Methodist Church of Victoria, The American Heart Association, or The American Cancer Society.

Fond memories and expressions of sympathy may be shared at www.rollingoaksfuneralhome.com for the KINION family.

In Memory of Mary Ann Kinion