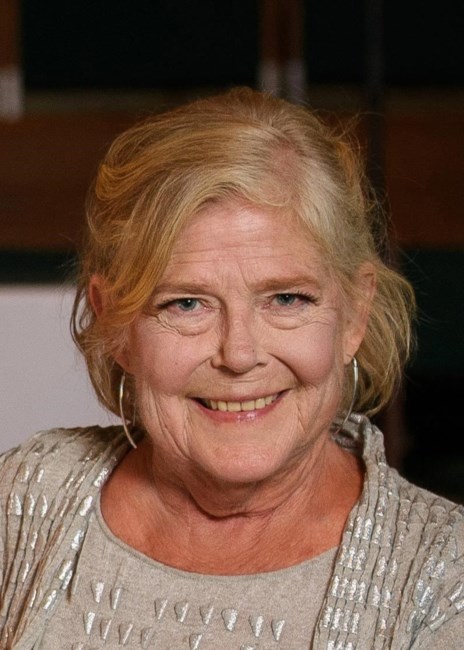 Elizabeth Flitcraft Larsen Elizabeth “Betsy” Flitcraft Larsen, 67, of Dayton, Ohio, passed away on Wednesday June 3, 2020, at Miami Valley Hospital, following a lengthy illness. She was born Elizabeth Gay Flitcraft on July 22, 1952 in St. Louis, Missouri, grew up there, and graduated from John Burroughs High School, Class of 1970. Among her favorite childhood memories was Camp Miniwanca in Michigan. It was here that she found her love of sailing and a lifelong love of the shore. Betsy attended Beloit College in Wisconsin in 1970 and transferred to Vanderbilt University in Nashville, Tennessee, the following year. At Vanderbilt she met her future husband, James “Jim” Milligan Larsen. She graduated in 1974 with a degree in Nursing and a minor in Russian Literature. Shortly thereafter she joined the cardiac intensive care unit at Barnes Hospital in St. Louis. In 1975 she returned to Nashville, where she served in the local public health department, which she found humbling and richly rewarding. Prior to beginning this work, Betsy and Jim travelled the country, driving across Canada to Alaska and visiting Mexico in the same trip. She and Jim were married in 1977 in a garden wedding at her parents’ home. They moved to Jupiter, Florida, where Betsy worked as a nurse at Martin County Hospital. In 1980, the couple returned to Dayton, where Betsy joined the continuing education center at the Dayton Veterans Affairs Medical Center. In 1982 Betsy earned a Master of Science in Nursing, graduating from one of the country’s first Internal Medicine Nurse Practitioner programs at the University of Pittsburgh. Betsy was a true trailblazer for women in medicine, entering the profession before the Nurse Practitioner was even legalized in the state of Ohio. The new degree was, however, recognized on the Federal level, and Betsy rejoined the Dayton Veterans Affairs Medical Center, leading the Internal Medicine Clinic as the sole Nurse Practitioner. Betsy developed a primary care practice for the veterans she loved to serve and joined the ranks of medical educators. A recurring high point in her service was the arrival of new Wright State University Medical Residents every July. Many of these physicians made the Dayton area their home and are in practice today. Betsy also taught nursing at Wright State University and the University of Cincinnati. She tutored students in math and science at local primary and secondary schools. She was warm and genuine in her relationships, easily developing deep friendships, as well as striking up a conversation with virtually everyone she encountered. Betsy enjoyed the outdoors, serving as the catcher on her high school softball team, playing field hockey, tennis, squash, golf and bicycling. Betsy had a passion for sewing, making outfits for her daughter and for her daughter’s friends. She was a voracious reader, listener of National Public Radio, and crossword turned Sudoku puzzler. With an eye for design and love of fine craftmanship, Betsy also enjoyed a good home renovation. Even as her health declined, Betsy was ever the teacher, a tremendous source of knowledge to those around her, often applying her medical knowledge in a sort of impromptu, hands on, continuing education. In recent years, Betsy kept the highest of spirits, often enjoying a top-down ride in her candy apple red VW bug turbo convertible. Betsy Flitcraft Larsen was a wonderful wife and mother, and will be dearly missed by all who loved her. She was predeceased by her father, Richard Kirby Flitcraft, II (1920-2014) and her mother Bertha L. Hitchner Flitcraft (1918-2007). She is survived by her husband, James M. Larsen (Dayton, OH), daughter, Kelsey Elizabeth Larsen, son-in-law, Matthew R. Robbins (both of Columbus, OH), her twin brother, Richard K. Flitcraft, III, (Cincinnati, OH), and two sisters, Anne H. Flitcraft (New Haven, CT) and Alyce E. Flitcraft (Portland, OR). Due to the ongoing pandemic, a celebration-of-life service will be delayed to a future date, as permitted by health concerns. In lieu of flowers, the family requests that any donations be made to the COVID-19 Response Fund for Greater Dayton, which is administered by the nonprofit Dayton Foundation, Dayton, OH.
See more See Less

In Memory of Elizabeth Larsen