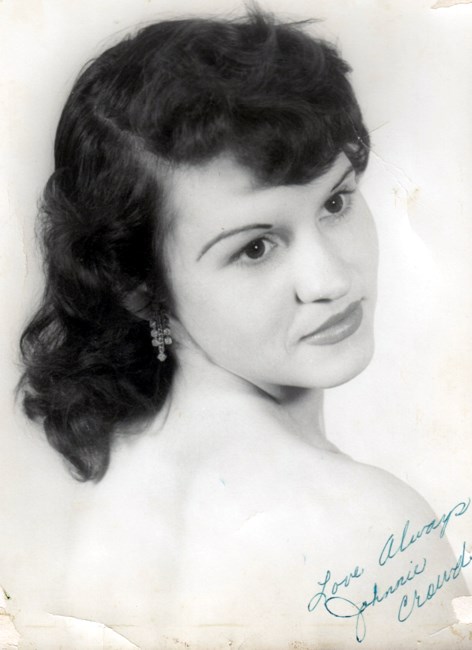 Johnnie Ruth Crowder, 79, of Shawnee, OK formerly a long time resident of Del City, OK passed away on December 10, 2017 surrounded by her loving family. Johnnie was born on December 29, 1937 in Boswell, OK to John Arch and Ebeline (Huntley) Thompson. She married the love of her life, Edward Raymond Crowder on August 20, 1954 in Boswell, OK. The couple settled in Del City, OK, and raised their two sons; Tommy and Jerry. Johnnie was a devoted and loving sister, wife, mother, aunt, grandmother and great-grandmother. She was very proud of her family and was excited to become a “grandma” to her three grandchildren. She was an excellent cook and enjoyed preparing meals for her family and friends. Johnnie was known for her feisty, yet good sense of humor. In her past time she enjoyed shopping, traveling, dancing, gambling, and listening to country music. Her favorite music artist was Elvis Presley. Her favorite football teams were the Oklahoma Sooners and the New England Patriots. (Especially, Tom Brady) She was a woman of extraordinary compassion for people and animals. When she and Edward would go hunting, she would video tape the deer as they escaped their fate. She had an unwavering faith in God. She was a member of Wesley United Methodist Church of Shawnee for many years. Over the years, she volunteered at the election polls. Johnnie was predeceased by her parents John and Ebeline Thompson; son Jerry Crowder; sister Billie Draper; brothers Troyce and Harry Thompson. She is survived by her loving husband Edward Crowder of 63 years; son Tommy Crowder; sister Sue Mock; grandchildren LaDonna Crowder, Johnna Cook and husband Brandon, Jerrod Crowder and wife Monica; great grandchildren McKinzee Crowder, Hagen Crowder, Stetson Cook, and a host of relatives and friends.
See more See Less

In Memory of Johnnie Ruth Crowder