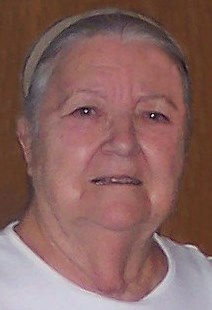 Martha Opal Martin went home to Jesus on January 16th, 2022 at age 93. Martha was born to Roy and Ollie Hicks on November 19th, 1928 in Davis, Murray Oklahoma. She was the oldest of 8 siblings. Martha met her first husband Robert S. Moorman in1944 in the town of Mangum Okla. They married shortly after on April 17th 1944 and went on to have three children Robert D. Moorman, Twalla Sue Pope, and Steve A. Moorman Sr. Martha met her second husband Earl W. Martin Jr. in Oklahoma City they married January 1st, 1974 later building a home and retiring in Eufaula in Oklahoma. After the loss of her second husband Martha moved to Del City with her son Robert Moorman. Soon after Robert bought land in Tecumseh Okla. where they moved to so she could be closer to her grandchildren. This is where she lived the remainder of her days with her son by her side. In addition to being a dedicated and loving mother and Grandmother, Martha also loved working in her garden, sewing, cooking, and spending time with her loved ones. Throughout her entire life, she held an unwavering faith in God and was always willing to help others in need. Martha is loved by many and will be missed greatly. Martha is preceded in death by her parents Roy and Ollie Hicks, three brothers Charles, Ronnie, and Darrel, two sister Mary and Betty, first husband Robert S. Moorman, second husband Earl Martin Jr., son Steve Moorman Sr., daughter Twalla Sue Pope, and grandson David Alan Moorman. She is survived by one sister Reba Moore of Ada, OK, along with a brother Donald Hicks of Davis, OK, a son Robert Moorman of Tecumseh, OK along with many grandchildren, great- grandchildren, and 3 great-great-grandchildren. And he said to him, “Truly, I say to you, today you will be with me in Paradise.” Luke 23:43 So with you: Now is your time of grief, but I will see you again and you will rejoice, and no one will take away your joy. John 16:22
See more See Less

In Memory of Martha Opal Martin