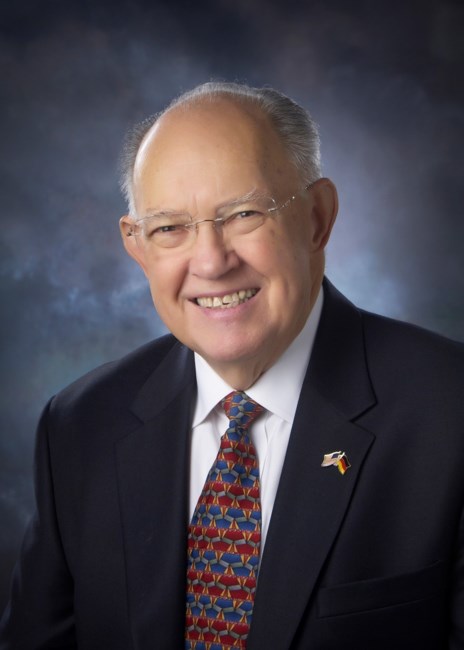 Martin Stark, 81, passed away peacefully on Sunday, November 21, 2021. Martin was born on November 10, 1940 in Dattenhausen, Germany to Josef and Maria (Guffler) Stark. Martin emigrated from Germany to Chicago with his wife and two small children in April of 1969. His brother Max got Martin a job in a large Chicago bakery where he worked nights while taking English classes during the afternoon. Soon thereafter, Martin started a new job at Battenfeld Corporation – a plastics injection molding machine company. His education, business savvy, people skills and strong work ethic allowed him to quickly move up the corporate ladder. In 1981, after accepting a position at Bekum America, he moved his family to Okemos, Michigan. With the same determination and work ethnic, he ultimately became President and CEO in 1992 and Chairman in 2010. Martin was a dynamic and tireless advocate for the plastics industry and devoted more than 50 years of his career to the growth and internationalization of “all things plastic”. His motto was twofold, “never let a customer down” and “employees matter”. Martin’s many achievements won him an SPA Blow Molding Division Lifetime Achievement Award in 2006 as well as earning him a spot into the Plastics Hall of Fame in May 2018. He remained as Chairman of Bekum America until October 2021 when he officially retired. Martin is survived by his wife of 56 years, Erika Stark; his son Juergen (Andrea) Stark; his daughter Bettina (Peter) Bruno; his son-in-law Jerry (Aline) Sambaer; 11 grandchildren: T.J., Julia & Micki Stark, Alex & Noah Bruno, Nicholas, Abbey, Patrick, Gerald III, Mitchell & Benjamin Sambaer; sister Maria Mielimonka; brother Herman (Doris) Stark; sisters-in-law Trudy Stark and Victoria Stark and many nieces and nephews. Martin was reunited in death with his adored daughter Petra Sambaer. He was also preceded in death by his parents; brothers, Anton, Max, Erwin and Josef Stark; sisters-in-law, Irmgard and Centa Stark and brother-in-law Helmut Mielimonka. To Martin, his family was his entire life. He enjoyed traveling, playing tennis, golfing, watching sports and reading in his recliner. He was a constant presence at his grandchildren’s events and their biggest cheerleader. Martin was a beloved Pops and Opa to more than just his family. He was respected and admired by many and will be greatly missed. A funeral mass will be held at St. Martha’s Parish in Okemos on Friday, December 3rd at 11:00 a.m. Private entombment will take place at St. Joseph Catholic Cemetery. The family will start receiving guests at 10:00 a.m. for a one hour visitation. The family is being served by Gorsline Runciman Funeral Homes of East Lansing. In lieu of flowers, contributions may be made in Martin’s memory to Be the Match @ https://bethematch.org (via online payment or print/mail form) OR the PlastiVan program thru the SPE Foundation at give.4spe.org/martinstark (via online direct link or send check payable to SPE Foundation to 83 Wooster Heights Road, Suite 125, Danbury, CT 06810). Fond memories and expressions of sympathy may be shared at www.greastlansing.com for the Stark family.

In Memory of Martin Stark